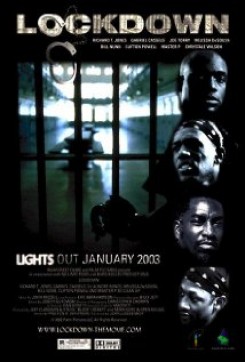 Lockdown is an intense crime-drama about mistaken identities. In the film, two men wrongly accused of a crime are imprisoned when their overzealous canine attacks police officers, instigating the authorities to take the men into custody.

In the scene, police officers stop a vehicle they believe is stolen. As they determine whether or not the men inside are suspects, a dog lunges at the officers from the back-seat of the car and they appear to shoot it. This illusion is accomplished with selective camera shots. After the actors exit the car, a gunshot is heard, followed by a yelp. The dog is then shown lying on the ground. In reality, the trainer stood just off-camera cueing the dog in the stopped car using hand signals, prompting the canine to bark, growl, and to jump out of the back-seat. Then the trainer put the dog on its mark and told it to stay, while fake blood - consisting of corn syrup and food coloring - was applied to the dog. Later in the film, we see a pit bull attached to a long chain inside a house. The dog strains towards the door, fiercely barking and growling with each lunge. Soon, a man takes the chained dog outside and ties it to a balcony railing while he converses with another man. To achieve the animal action, the trainer placed the dog on its mark inside of the house and attached the chain to the railing. The actor then merely unhooked the chain and walked the dog outside where he reattached the chain to the balcony railing. The trainer stood just off-camera and retrieved the dog afterwards. Also, there are two scenes in which a dog is shown riding in the front-seat of the car. Here, the trainer hid in the back-seat while the dog was secured with an unseen safety harness. Finally, during a swimming match, a dog sits poised between two young men. Again, the trainer cued the dog to stay on its mark between the two actors. As a precaution, one actor held the dog's leash throughout the scene, but the content canine patiently sat and listened to their conversation.