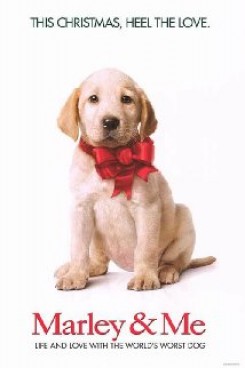 After John Grogan (Owen Wilson) surprises his wife Jenny (Jennifer Aniston) with a new puppy, they soon realize they have adopted a neurotic, mischievous and very destructive family member — who teaches them about loyalty, compassion and unconditional love.

Streets were closed off to traffic and all grounds and fences were inspected for safety. A stuffed prop dog was used during most of the rehearsals.

For the scene in which the puppy jumps in front of the window in the garage, the puppy was placed on a custom-built platform and cued to jump as a trainer stood nearby. Whenever Marley is shown jumping the fence, a picnic table and platform were strategically positioned on either side of the fence, and the well-rehearsed puppy was cued to jump. The scene with the puppy running down the beach was filmed in separate shots — several puppies were alternated so that no one puppy would have to run the entire distance.

As a puppy, Marley runs into the screen door, then breaks through it. For the initial run-in with the door, trainers released the puppy a few inches from the door so that it would merely bump into it without hurting itself, and then called it to the other side. The puppy had been trained to run through a special "breakaway" screen door, which was built to give way with the slightest pressure.

Whenever either the puppy or the dog is seen performing such mild action as sitting or lying down, walking (on- or off-leash), playing tug of war, or tipping over objects or biting at them, trainers placed the dog on its mark and stood off-camera, using hand signals and verbal commands to cue the action, which the trained canines were accustomed to. Any object Marley is seen to knock over was a lightweight prop that trainers deemed safe. For shots in which the dog pulls on its leash, off-camera trainers excitedly called the dog to come, causing it to go to the end of its leash and pull.

Whenever Marley licks a person or object in the film, baby food was used to entice the dog to lick. The same technique was used with the diaper to encourage the dog to "get it." All food was deemed safe for consumption, including the dog's vomit, which was just dog food soaked in water. For scenes in which Marley chews on items, such as the kitchen floor, couch cushions or car seats, trainers cued the dog to "get" the objects. One particular puppy and one particular adult dog were specially trained to chew on things and spit them out without swallowing anything.

Whenever Marley is seen in a car, a trainer hid in the backseat. Sometimes the car was actually on a special camera trailer, which means the trailer moved, but the car did not. Other times, the car was stationary. For the scene in which John drove with Marley on his lap, the well-rehearsed actor only drove a short distance, and the trainer hid inside the car to cue the dog. When Marley was in the backseat with the boy, he was cued to "stay." For scenes in which Marley barks, sometimes he was cued to bark and other times the bark was added in post-production.

Whenever people with dogs are shown at a dog beach or in obedience class, these were either real dog owners with their own dogs or well-rehearsed actors. All the dogs were obedience-trained and/or on leashes. They were all introduced to each other before filming to become familiar with each other and then allowed to play freely and do whatever they normally would with their owners. Marley's action during the obedience class was cued by trainers, except for the humping, which involved the use of deer scent as an enticement. A choke chain was never used — the leash was attached to the collar.

For the shot in which Marley jumps over the fence at the Pennsylvania house, the dog was trained to jump, and the fence was lowered to an easily attainable height. Whenever the dog jumps onto or near someone, trainers used verbal commands and hand signals to cue it to jump up. Anytime the dog knocks someone down, the actor's fall was choreographed. The scenes in which Marley knocks down the toddler were filmed separately; the boy and dog were not in the scene at the same time.

From John's (Owen Wilson) lap in the car, Marley jumps partway out the window and walks with his front paws on the road while the car is moving. This scene was filmed in separate shots. The dog was trained to perform the action in this scene one step at a time. The dog was first cued to move across the actor's lap, and then stick its head out the window. Its feet never touched the ground while the car was already in motion. Then, the dog was equipped with a safety harness and placed in a stationary car, and the trainer placed the dog's front paws on the road (while its rear end was still on the actor's lap). Once its front paws were on the ground, the car slowly moved forward a very short distance while the dog "walked" on its front legs with the actor supporting its torso and back legs. The actress driving the car and the actors driving nearby vehicles were all extremely well-rehearsed to drive slowly and for a short distance.

For the montage, in which John lists things that he and the dog have done, all scenes were shot in very few takes. For the shot in which the dog digs near the plant, it was trained to dig, and a hole was pre-dug and partly filled with loose soil. For the shot in which Marley gets a bath, actors used nontoxic dog shampoo and the dog was rinsed and dried thoroughly immediately afterward (it was all filmed in one take). When the dog chews on the leash, the leash was pre-cut and the dog was cued to "get it." When he walks in the rain, it was warm Miami rain and the dog was accustomed to it. When he jumps and "bites" the mailman's bag, the dog was cued to get it and shake it. When he "bites" the UPS boxes, the UPS worker was a costumed trainer who cued the dog to bite certain easy-to-grip spots on the boxes. When he destroyed the sand castles or bit the chair, he was cued to "dig" and to "get it." The baseball field scene was filmed during an actual baseball game. The dog was cued to run the stairs, which were not steep. Then, between innings, the actor was allowed to throw a ball to the dog, and the dog was cued to fetch it. The dog was unfazed by the noise and the crowd.

For the scene in which Marley has a necklace in his mouth, the necklace chain was tied to a wooden dowel, which gave the dog an easier grip and prevented a choking hazard. The dog never actually swallowed the necklace.

The dogs enjoyed filming scenes in which they swam, and nearby trainers closely monitored them. The Labradors in these scenes were very good swimmers and were accustomed to the water.

For the scene in which Marley lies under the tree in the rain, whimpering, the dog was equipped with a prosthetic belly attachment to make it appear bloated. The rain was created with a rain machine and barely got the dog wet (the tree acted as a shelter). The whining was a sound effect added in post-production.

For the veterinarian scenes, an older and well-trained dog was used. The dog was cued to lie still on the exam table, and the actors were well-rehearsed for the mild action. To make it appear as if Marley had an IV drip, the tube attached to the IV bag was taped to the dog's leg and gauze was wrapped around it. No syringe or actual medicine was used. On the other end of the tube was a pouch hidden under the dog's blanket, and the liquid flowing through the IV ended up in that pouch, not in the dog's body. The dog's eyes closing was a visual effect.

Horses are briefly seen in barn stables. For this mild action, the horses' owners placed three horses on their marks inside their respective stalls, at their own home stable. A trainer used hay to entice one of the horses to stick its head and neck out of the stall, and the horses were then filmed doing whatever came naturally.

While sitting on John's lap at the beach, Marley sees pigeons on the sand and breaks free from John's hold to chase them. Seagulls also fly around as the dog runs. The birds were filmed in their natural habitat, without the puppy present. Trainers scattered food onto the sand to entice the birds to land. Trainers then "shooed" the birds to get them to fly away. The shots of the puppy were filmed separately.

The scene with the sheep surrounding the car in Ireland was filmed on location with a real sheep herder.