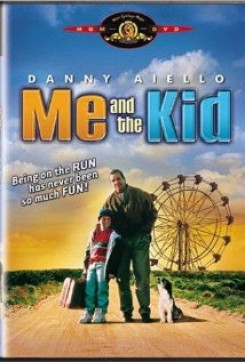 Me and the Kid

Me & The Kid is the story of Gary Feldman, an 8-year-old boy, and how he is kidnapped and held for ransom by two bumbling ex-cons. Harry Banner and Roy Walls are both newly released ex-cons who are plotting a robbery at a posh home belonging to the Feldman's. Their plan goes awry when they realize that the Feldman's son, Gary, has stayed home from school that day and can identify them. They decide to kidnap Gary instead, and a friendship between Banner and Gary ensues. It is this twosome that plots against Walls, making plans to get money from Gary's father and take off for Mexico. We watch to see it they will succeed, or if Gary will be returned to his unloving parents. While shopping one day, Banner gets a puppy for Gary from a little girl with a box of puppies outside the store. In one scene in which Gary's parents are trying to coax him down from a Ferris wheel, the puppy is walking around Gary's parent's feet. Gary's dad takes his foot and kicks the puppy out of the way. Although this looks bad on screen, on set the actor feined the kick by placing his foot under the puppy and tossing him out of the camera's view. The puppy was never harmed and thought that this was a form of play. Actually, on set the puppy ran back to the actor to play some more. A dog, who is supposedly the puppy after growing up, is also present in a later scene riding in a car.

Other animal action entailed one scene in Gary's room where two gerbils in a cage run on their wheel, birds are seen flying in a background scene and two rats are seen on a ledge in an alley.