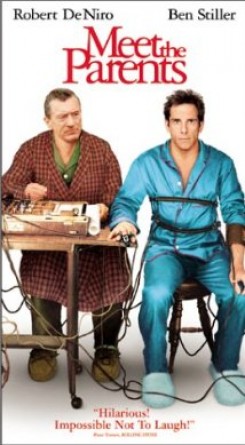 In this comedy, Greg is in love with Pam and wants to marry her. But when Pam's sister's wedding prompts the happy couple to spend a weekend with her parents, Greg's plans of familial bliss are thwarted.

Two five year-old Himalayan cats, Bailey and Misha, play Jinx the family pet. Before filming began, both cats spent time on the set getting to know the actors and surroundings so that they felt comfortable during the shoot. Two trainers and a veterinarian were also on the set at all times. Jinx has several scenes with Robert DeNiro as Pam's difficult father Jack, and the actors became fast friends during filming. Their key moments together include Jack holding and petting Jinx, achieved by the animal trainer carefully handing the cat to Mr. DeNiro immediately before the scene begins. Also, when the animal actor places the cat on the ground after he is done petting it, the cat would run to the treat-wielding trainer standing off-camera. Later, when the family sits down to dinner, Jinx is shown rubbing Greg's leg underneath the table. Suddenly, the urn holding Grandma's ashes is knocked off the mantle and spills onto the floor. Jinx seizes the opportunity by running onto the ashes and transforming the remains into a litterbox. To achieve the animal action in this scene, the trainer first released the cat and verbally cued it to rub Greg's leg. Then, when the ashes are spread over the floor, the cat watched the trainer bury a plastic baggy of food in the ashes. After the cat is released, another verbal cue from the trainer prompts Jinx to dig earnestly into the ashes. A hidden hose then wet the ashes from beneath to create the illusion of jinx spoiling the remains. After Greg lets Jinx out of the house, the cat climbs up a trellis and onto the roof. Greg follows the cat and finally catches it, holds it off the edge of the roof, and drops it onto the ground. For this sequence, the trainer attached a safety harness to the cat for the entirety of the scene. After extensive pre-production training, the cat was able to deftly climb onto the trellis and roof, aided by verbal cues. A prop cat was used for the dangling and dropping part of the scene. At another point in the film, Greg brings home a shelter-cat which proceeds to ravage the family room and destroy the bridal gown hanging up on the door The cat is then shown eating Greg's Nicorette gum. For this scene, the trainer replaced the gum with cat food. Since the cat was too small to actually move the bridal gown on its own, a dog was hidden underneath the dress by one trainer and coaxed to the other side with an edible treat by another trainer. After the dog left the set, the cat was gently placed under the edge of the gown so it appeared as though the cat came out from underneath and was, therefore, guilty of the damage. Also, in two scenes we see the cat using the toilet instead of a litterbox. Both cats practiced sitting on the empty toilet before the scene was filmed. The trainer verbally cued the cat to stay and the cat happily obliged until the scene was over.