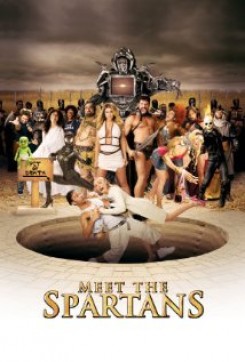 In this spoof that references a slew of pop culture people and events, Captain Leonidas (Kevin Sorbo) and his men must fight the Persians in a parody of the film "300."

A man carries a dog in his arms, sets him down, and commands him to bite Leonidas' private parts. The actors were introduced to the dog before filming began and were instructed on its proper handling. When the actor set the dog down, the off-camera trainer cued the dog to walk from Point A to Point B and stop at the other actor. Trainers then cued the dog to tug and pull at a piece of material attached to the crotch of the stunt double. The dog was rewarded with treats and praise and was rested between takes.

Two small dogs appear to be getting intimate with each other. The dogs were given ample time to become familiar with each other and with the action for this well-rehearsed, brief scene. One dog was rehearsed with a fake stuffed dog and the stuffed animal was replaced by the second, real dog during filming. The trainer cued the second dog to stand still and stay. Both dogs were rewarded afterwards. The flame in the background was a controlled flame placed far away from the dogs.

Several small crabs crawl all over a woman's underwear in a brief close-up. For this scene, two dozen fiddler and red crabs were removed from their aquarium using a small mesh net and placed in paper cups — only a couple crabs per cup, to give them room to move comfortably. Gently tipping the cups over from a few inches above their mark, specially trained personnel wearing rubber gloves released the crabs onto a dummy. They were allowed to roam free for a few seconds before being retrieved. The crabs were only out of their aquarium a few minutes.

In a brief scene, a cat walks across the sand and paws at it, as if covering up feces, and then walks out of frame. Trainers released the cat from a crate on her starting mark and cued her to walk a couple of feet to a sand pile, where she was cued to paw at fake feces and rewarded with treats. An animatronic cat was used for certain action, such as mouth movements.