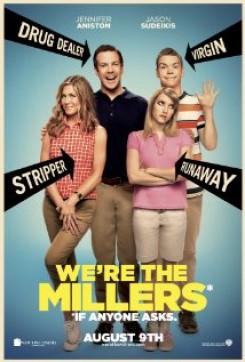 A pot dealer is forced to create a fake family so he can move a large quantity of pot from Mexico into the United States without attracting suspicion.

In the scene where the family is taken out of the trailer and questioned by border patrol officers who have dogs on leashes, while the dogs bark at the family, the trainers of the dogs were dressed as the border patrol. A trainer was also located off-camera cuing the dogs to bark.

In the scene where the boy gets bitten by a tarantula on his privates and he ruffles his pants to free the spider, and a tarantula falls out of his shorts and on the ground, the spider was a prop. The live spider crawling on the ground was shot separately as an insert shot.

Due to late notification and limited resources, the American Humane Association did not monitor any of the donkey action, background dog action and some of the tarantula scenes.