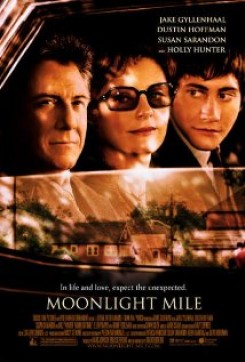 In this touchingly honest film about love and loss, Joe Nast (Jake Gyllenhaal) floats through mourning his fiancé's unexpected death by comforting his once future in-laws Ben (Dustin Hoffman) and JoJo Floss (Susan Sarandon). Joe is forced to come to terms with his own emotions when he meets a potential new love and must choose between the life ahead of him and life that was tragically taken away. The tragedy is also felt by the Floss family dog, Nixon, who is physically ill in the beginning of the film, but recovers upon meeting a feline adversary and future friend.

Nixon the Dog & a Feisty Feline

A yellow lab named Lady played the part of Nixon, the Floss family dog. Nixon starts out the film feeling under the weather, and Joe adds some Pepto Bismol to Nixon's dog food bowl. Nixon eats the medicinal concoction and lies on the floor. The Pepto Bismol was actually strawberry-flavored milk, which Lady heartily enjoyed.

At the funeral reception soon after, Nixon eats food crumbs off of the floor. Trainers smeared a hot dog along the floor to cue the dog to follow a certain path through the people at the party, and the dog was rewarded with treats left on the ground. Still sick, however, Nixon proceeds to vomit all over a reception guest as she pets him. Since Lady the dog was actually in perfect health, production simulated vomiting by creating a tube that the dog could hold in her mouth that would eject liquid when prompted. The liquid consisted of cream and peas and the stick was edited out of the picture in post production, making it appear as though the dog was throwing up on her own.

Later, Joe walks into the post office with Nixon. A cat sitting on the counter inside hisses at the dog, who barks back at the testy cat. The cat then jumps on top of the dog and they have a brief encounter before someone retrieves the cat. The cat-friendly dog, Lady, was trained to "stay" while the cat, after weeks of practice, was trained to jump onto the dog's back and then hop off. To simulate the "fight," trainers placed a puppet cat on the dog's back as the dog was cued to spin around. Off-camera trainers also cued the animals to hiss and bark.

The cat sits on the counter and then later is carried from a box. Trainers cued the cat to "stay" from off-camera while the actress picked up the cat and carried her.

Again at the post office, Joe climbs over the counter and accidentally knocks over a package, which lands next to Nixon.

Nixon goes for a car ride with Joe, hanging his head out the window to feel the breeze. For this brief trip, Lady was being held on a leash by a trainer, who was hiding on the ground in the front seat of the car.

Nixon and the cat seem to make nice as they sit next to each other quietly in the backseat of a car. The cat and dog were filmed separately for this scene. The animals were trained to lie down on the car cushions and "stay" while a trainer hid on the ground in front of them to reinforce the command with hand cues.