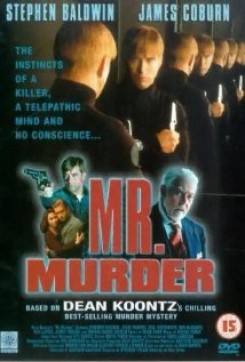 Mr. Murder is a film about a man who creates a young man, Alfie, in a laboratory and programs him to kill on his command. Alfie grows up to look just like Marty who is a family man and writer. He sees Marty on the cover of a magazine and thinks that he is the man they wrote the article about. Alfie sets out to kill Marty and claim his family as his own.

Alfie's pet dog, Pepper, is shown going in and out of his doghouse and sitting by Alfie's chair as he pets him on the head. The trainer put the dog on his mark and cued him with verbal and hand commands.Alfie takes a knife and puts it by dog's throat but he is told to stop and does. The two young girls have a hamster, a lizard and a snake in separate cages in their bedroom. The girls talk to these animals through the cages. There is a brief flashback in the film of a street in Peru where there are llamas, an ox and some horses seen walking by. Santa Clause rides a horse down the street in another brief flashback. A cat jumps off a garbage can in an alley and then later is shown up in a tree. At the end of the film there is a dog on leash walking with a woman down Marty's street.