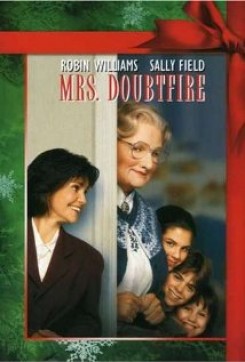 Robin Williams is at his hysterical best in Mrs. Doubtfire, the story of David, an irresponsible, unemployed actor who specializes in voice overs and impersonations. Miranda, David's beautiful, successful, career-minded wife, is now suing him for a divorce due to his irresponsibility. David and Miranda have three children, whom David simply adores. Once his wife files for divorce, David comes up with the brilliant plan to impersonate a maid/nanny, the 60-year-old Mrs. Doubtfire, so that he can continue to be close to his children. His disguise fools Miranda and she hires him. He becomes so efficient that she hires him full-time. Through his series of changing from David to Mrs. Doubtfire, he becomes indispensable as the housekeeper, and eventually manages to obtain his own television show telling children's stories, while at the same time trying to recapture the love between his wife and himself.

Animal action is limited to two scenes. In one scene, David arranges to have a traveling petting zoo entertain for his son's 12th birthday. Miniature ponies, goats, a calf, a lamb, bunnies, and several other animals are seen milling about and being petted in front of the house and some inside of the house. Off camera gates kept all of the animals corralled in front of the house. A neighbor woman is seen shooing a rabbit away from her flower bed with a broom. The woman does not hit the rabbit with the broom, but just gently nudges it, causing the bunny to hop. The miniature pony is also seen eating the birthday cake that Miranda has just brought home. In the other scene, Mrs. Doubtfire picks up the T.V. remote control and tosses it into the fish aquarium so that the children will no longer watch television and do their homework. This scene was shot in cuts. A phony remote was dropped into the aquarium and the fish were never in any danger.