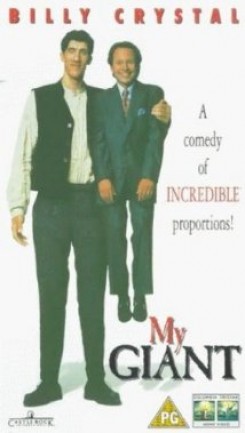 My Giant is a comedy about a second rate talent agent named Sammy who discovers a very large guy in Romania and sets out to make him a Hollywood star.

Animals are seen primarily as background atmosphere in the scenes that were filmed in Romania. Sammy goes to Romania because his only client is making a film there. While visiting the movie set, horses are seen walking A to B in the background. Later in the film, more movie making is depicted and horses are seen with riders or standing around. When the giant, Max, is being lowered onto the back of a horse, a handler is present holding the horse's bridle. Sammy narrowly misses driving into a herd of sheep that are standing in the road. Max rescues Sammy from the car which has veered off into a stream. As Sammy recuperates in the Romanian countryside, a variety of animals are seen as atmosphere in several scenes. Handlers herd approximately 30 sheep down a country road while a donkey, small dogs and chickens mill around.