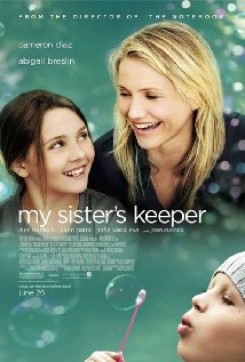 Since she was a toddler, Anna's (Abigail Breslin) parents have been using her bone marrow to help her older sister, diagnosed with cancer, survive. When Anna turns 11 and her sister needs a kidney, Anna hires a lawyer to emancipate her from this medical prison and save her kidney.

Campbell (Alec Baldwin) has a service dog named Judge that he takes with him everywhere. A border collie mix named Ryder played Judge. All grounds were inspected for safety before filming and only necessary cast and crew were allowed on set. The actors were introduced to the dog before filming and were instructed on his proper handling.

In one scene, the dog greets Anna (Abigail Breslin) when she enters Campbell's office. A trainer put Ryder on his mark (a dog bed) and then cued him to walk to the actress and back to the bed.

During the trial, the dog is seen walking, sitting and lying in the courtroom or judge's chambers with Campbell. Right before the verdict is given, the dog puts his front paws up on the desk, barks, and then begins running in circles next to Campbell. After the verdict is given, Campbell runs out of the courtroom and collapses in the hallway. The dog follows him and stands next to him, barking. This sequence was filmed in separate shots. A blanket was placed under the table for the dog's comfort. A trainer stood off-camera and cued the dog to perform such mild actions as walking, lying, sitting, placing his feet on the table, barking and turning in circles.

When Campbell and Judge come to visit, Anna goes outside to greet and pet the dog. Then Judge and Campbell walk to Campbell's parked car, get in and drive away. This scene was filmed in separate shots. One trainer placed Ryder on his mark and another trainer cued him to run in the yard. After the actress petted Ryder, a trainer cued him to walk with the actor to the parked car. Another trainer hid in the car and called to the dog, who jumped inside. The car was driven slowly a short distance.

The seagulls at the beach were caught on film in their natural habitat.