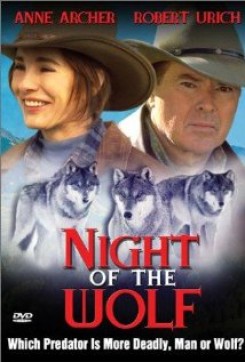 Night of the Wolf

When widowed rancher Claire McNichol (Anne Archer) finds herself trapped in the woods with a wolf, her teenage son, Jesse (Zach Bostrom) puts his own life on the line to rescue her.

Near the beginning of the film, a wolf runs free in a field. Claire, on horseback, pulls out a gun and shoots at wolf. She misses and the wolf runs away. The wolf was filmed separately in this scene. A trainer released the wolf hybrid, which ran to another trainer who was buzzing it to "come." The actress actually aimed her rifle at a tree branch, which was set up to simulate where the wolf would be. The firing of the rifle did not bother the horse since only quarter loads of gunpowder were permitted in the blanks, which drastically reduced the noise level of the gunfire.

As Claire rides along in the woods, she and her horse are startled when a trapped wolf ferociously growls at them. The wolf surprises and frightens the horse, which rears up, causing Claire to fall hard onto the ground. The horse then runs away, leaving an injured Claire helpless in the face of the angry wolf. Although the actress, Anne Archer, took riding lessons prior to filming and was quite comfortable on a horse, a professional stunt person rode a trained rearing horse for this intense sequence. The stunt person cued the horse to rear up and faked a hard fall to the ground, which had been cleared from harmful debris prior to filming. The actress was switched out with her stunt double and was filmed lying on the ground, hurt, while the horse, which had been switched from the rearing horse, trotted to a trainer off camera. As Claire lies on the ground, she notices that the wolf's front paw is attached to a snare trap wire. Its paw is bloody, but it still strains against it to try to get at Claire. Two female wolf hybrids, Flame and Ellis, shared the role of the trapped wolf. Trainers placed the wolf hybrid on a waist tie and attached a fake snare - a cable wire that was tied to the animal's leg with soft, pliable Velcro. Trainers held onto the wires from off camera, using give-and-take to allow the wolf to lift up its paw, which was covered in fake blood. The wolf and horse were kept at least 10 feet apart and filmed separately when possible.

The wolf continues to growl at Claire. Trainers kept the wolf's eyeline by standing off camera holding a stick with treats on it, and cued it to growl using the command "teeth." Different looks from the wolf were also captured on camera in a similar fashion. Trainers always rewarded the animals with treats for a job well done.

Since the fall has injured Claire to the point where she cannot walk, she is forced to lie next to the trapped wolf. The scary wolf stares at her as she rummages through her bag. Claire offers water and food to the wolf by placing them in a bowl she has attached to a stick. She pushes the bowl over to the wolf and it hungrily devours it. The wolf viciously growls at the woman when she removes the bowl. For this sequence, a trainer doubled as actress. Trainers also cued the wolf to growl from off camera.

More mobile but still hurt, Claire limps over to two wolf cubs she sees stranded in the woods nearby and takes them to their trapped mother. The cubs are happy to see their mom and affectionately climb on her. Three malamute puppies named Eve, Abel, and Cain, were featured in this role. The pups were introduced to the wolf hybrids several weeks prior to filming in order to acquaint them with each other and assure that they could realistically simulate a "happy family." Luckily, everyone got along famously and were old pals by the time filming commenced. At one point, a cub goes to Claire and she holds and pets it. Trainers placed bits of food on the ground next to the actress to tempt the puppy in her direction. The same technique was used to prompt the pups to follow the actress to the stream.

Soon, another wolf joins the clan. It walks over to the trapped wolf and growls at Claire along the way. It's the papa wolf. He affectionately licks at her paw, perhaps attempting to free his mate from the snare. Two male wolf hybrids named Eli and Fang shared this role. Trainers released the male wolf and cued it with a buzzer over to the female wolf. Trainers had placed meat flavored baby food on the back of the trapped wolf's paw to get the male wolf to lick it. Later, it stands above Claire on an overhanging ledge, watching her every move. Production built a sturdy platform and covered it in bushes and dirt. Trainers placed Eli on the woodsy platform and cued him to stay from off camera.

Demonstrating her newfound trust in the animal she once reviled and feared, Claire clips the wire off of the wolf's leg and it runs away. A trainer doubled as actress to cut the wolf free, while another trainer cued the wolf to "come" from off camera.

AHA ensured that all terrain was checked and cleared for safe riding conditions. The stream was of extra concern, and trainers scoured the stream for the most shallow point and cleared the stream bottom of unsafe debris. AHA also ensured that the time spent in the water was minimal and that the horses were kept moving once out of the water to generate warmth. In addition, many riding sequences were actually done by professional wranglers who doubled as actors throughout the film. These scenes include the rides through the stream and Claire's fall, as well as the search party towards the end of the film.

Later, horses standing in a corral are startled by gunshots. All gunfire was shot away from the animals and only quarter-loads of gunpowder were permitted to reduce the noise level. Cotton was also placed in the animals' ears as an added precaution

Some other mild horse action includes horses standing in a corral eating hay and Claire's horse Lucy walking into the barn at liberty. Trainers led the horses into the corral, where they were content to munch on hay. Lucy was tempted into the barn by a trainer standing off camera with a bucket of feed, with which she was rewarded.

Spanky's in the House

Spanky the family Bulldog was played by none other than a dog named Spanky! Spanky's various activities include sitting (at a BBQ, inside the house, outside the house), and playing catch. The trainer would release the dog to go with the actor and the fun would commence!

A deer quietly eats grass in the woods. A man shoots at the deer and it runs away. Trainers placed the deer on it mark and scattered food on the ground for it to eat. From off camera, trainers attracted the attention of the deer with noises and the deer looked up. Trainer called to it to "come." No gunfire was actually used around the deer. The gun shooting was filmed separately.

A bobcat is caught in a snare trap. Although unseen, it is implied that the trappers shoot and skin it. The trapped animal was played by a 16 year-old bobcat named Ninja. Three trainers positioned Ninja in a fake snare, actually a leash, while the two actors pretended to shoot the cat - no gunfire was actually used around the animal. The dead cat was a taxidermy prop.

Ducks swim in a misty pond. This was natural.

Trappers roast a rabbit on a spit. Production purchased the rabbit as food product from a local market.

Production also obtained taxidermy props that include: the trappers' animal hides that are stretched to dry in front of their cabin, the dead beaver that Claire finds near the stream, and the mounted deer head in the cabin.