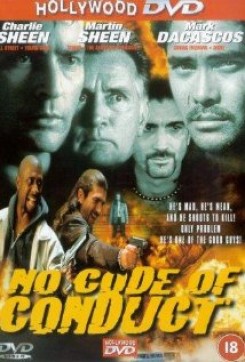 No Code of Conduct

No Code of Conduct is an action film involving cops and drug dealers. American Humane Association had been informed by production that there were no animals being used in the filming. Therefore, AHA was not on set and was not involved in the monitoring of any animals involved in the production.

The script called for the explosion of a drug warehouse at the end of the film and production chose to use an abandoned building at Phoenix Trotting Park in Goodyear, AZ. During the filming of the special effects explosion, hundreds of birds that were indigenous to the location were injured and killed. Although AHA was told by a production spokesperson that the company had attempted to clear the area and the building of the birds, there were several hundred birds still in the building at the time the explosives were detonated. According to a media source at the time of the incident, a representative from Arizona Department of Fish and Game approved the explosion.

For The Birds Rehabilitation Foundation sent volunteers into the area and the building to rescue the surviving birds. Other volunteers from Urban Wildlife Society also responded. According to their reports, hundreds of birds were killed and approximately 140 were injured. The birds were identified as pigeons or English House Starlings. At least 12 volunteers from For The Birds Rehabilitation Foundation have cared for the rescued birds ever since.

Ken White, Director of the Arizona Humane Society stated that "It was just awful…The impact was such that hundreds and hundreds of birds were incinerated. We'll never really know how many."

The director of the film, Bret Michaels, has indicated that he intends to make a donation to help recoup some of the expenses incurred by the rescue groups.

Incidents such as this should remind filmmakers that AHA's Guidelines for the Protection of All Animals in Filmed Media include insuring the safety of wildlife that inhabit filming locations. AHA Guidelines are a "code of conduct" and state:

It is production's responsibility to assure the safety of the natural animals in the filming area, and to consult the agency or persons responsible for the removal of wildlife from location sets. Any such animals that remain on the set are subject to AHA's Guidelines and Procedures. If native animals are not to remain on the set, they must be carefully removed, relocated, properly housed and cared for, then safely returned to their habitat after filming.

After screening the film when it aired on February 29, 2000, AHA noted that a snake also appeared in the film wrapped around the body of an exotic dancer.