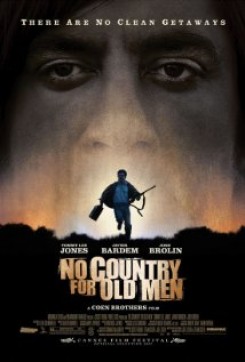 No Country For Old Men

Llewelyn Moss (Josh Brolin) is a Texan hunter who lives a modest life. But when he stumbles across the scene of a drug deal gone bad, the hunter becomes the hunted as he attempts to run off with the money.

Several antelope stand in an open field. Llewelyn (Brolin) shoots at them and one is hit and falls. The others run off. He follows a trail of blood and finds a dog limping in the field. This scene was created using a combination of stock footage of the antelope running, computer-generated imagery (CGI) of the antelope being shot and a stuffed prop for the fallen antelope. As for the dog, a lightweight strap was gently placed around the dog's paw and raised slightly to give the appearance that it was injured and limping. A trainer placed the dog on its mark and another trainer stood off-camera using a combination of verbal cues and hand signals to get the dog to run and look in different directions.

A dog chases Llewelyn down a hill and into a stream. As the dog exits the stream, it lunges into the air toward the man, who shoots it in mid-air. The dog lands dead near the man. This scene was filmed in separate shots. For the first part, in which the dog jumps into the stream, one trainer placed the dog on its starting mark on shore and another trainer, who stood in the water holding a raft, called the dog. The dog, who loves to swim, jumped in the water and swam to the awaiting trainer, who retrieved it and placed it on the raft to rest. Toys were used to excite and encourage the dog to swim to the trainer. Whenever multiple takes were needed, trainers carried the dog to shore to prepare it for retakes. The carrying of the dog and the use of the raft both helped ensure that the dog would not be overworked or become too tired. For the second part of the scene, in which the dog comes out of the stream, the trainer held the dog at its mid-stream mark on the raft, and a second trainer on shore near the actor called the dog. The dog swam off the raft to the shore, where it was cued to jump at the actor. The dog was not on set for the gunfire. A safety crew was stationed on a raft in the stream as an extra precaution.

Ed (Tommy Lee Jones) leads a horse into a horse trailer. Later, he and another man ride and walk horses through an open field of dead people and a dead dog. Wranglers instructed and prepared the actors to ride the horses and to load them into the trailer. The actors and animals were introduced to each other before filming and were comfortable with the actions. Production provided documentation that the dead dog was fake.

Anton (Javier Bardem) shoots at a bird on a bridge and misses. The bird in this scene was created with CGI.

A cat drinks from a water bowl at a motel. For this shot, a trainer placed the cat on its mark in front of the bowl. The cat then drank the water as a natural response to having it in front of him.

Chickens are in crates on the back of a truck. A single live chicken was placed in each crate with several stuffed prop chickens and roosters. The chickens were accustomed to being in their crates, which were thoroughly inspected before filming.

A house is overrun with cats, which sit on the couch and walk across the sink. Cats were placed on their marks by trainers, and food was placed around the area to entice the cats to roam around the house. Trainers remained nearby. The cats were collected by trainers and were rested at the end of each take. The house was secured for filming, and netting was placed outside the house as an extra safety precaution.