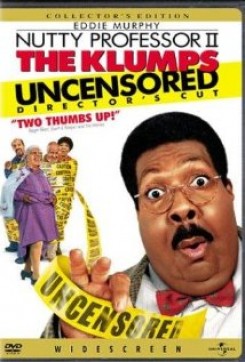 In this comedy, Eddie Murphy plays Sherman Klump, a nerdy, overweight college professor with an alter-ego. Upon discovering a youth restoring potion, Klump is offered a large amount of money by a leading pharmaceutical company. Klump's alter ego, who starts out as an inner voice, soon breaks out of Klump's body and becomes his own person, and with the help of his dog, Buddy, tries to steal the formula before Klump can sell it.

Dog and Cat Action Buddy, the dog, chases a cat in a parking structure. The trainer released the cat from a cage and it ran to another trainer who was waiting off camera with an edible reward. A second trainer released Buddy just as the cat reached the first trainer's arms. The cat was secured in a small crate. The dog was then retrieved and taken off the set on a leash. Hamster Action Hamsters played a big role in this film. Two trainers provided fifty hamsters of various sizes and colors. These furry little creatures were transported in small cages and upon arrival to the set, were placed in big, comfortable terrariums provided by the trainers. Whenever you see a hamster handled by an actor, it is a prop. A hamster crawls through a maze and is picked up by Professor Klump and put into a terrarium. The trainer had the hamster practice crawling through the maze several times before filming the scene so it would be familiar with the course. To add some incentive for the hamster, the trainer placed small pieces of cheese inside the maze just before filming. During a press conference held by Klump one hamster has its way with another hamster. One hamster is released by a trainer who stood just off camera. The hamster is trained to climb on top of a prop hamster and simulate humping. This same hamster is then shown spinning around and around and growing bigger with each spin. A trainer set the hamster on a spool and gently turned it with a long padded brush. As the animal begins to grow in size, animatronic hamsters take over. Buster, The Basset Hound Buster is a Basset hound and appeared as a puppy and as a grown dog. A five month old pup known as Digger, proudly played the pup and Haley, a five year old hound played the more mature Buster. There were two veterinarians, as well as two trainers on the set at all times. One trainer would place the dog on its mark and the other would stand just off camera to provide any extra help or coaching the dog might need. There are two scenes where it appears that Buster is drinking the potion that Professor Klump has developed. It is a non-toxic mixture of water and food coloring. The dog bowl that it is poured into, was specially made with a hole in the bottom. When the formula is poured into the bowl, it stays in the hole, away from the food. Although it looks as though Buster is drinking the formula, he is really enjoying his favorite dinner. As Buddy enjoys a cab ride in one scene, he sees two dogs humping on the side of the road and cheers them on. The two dogs have known each other for years. It wasn't hard for the trainer to get these two dogs to act naturally as they were placed on their marks! Parrot Action A trainer provided both the parrot and the perch for a dinner scene in which the bird sits upon its perch. The doors and windows were closed in case the parrot got bored with his close ups and decided to take flight. Two trainers stood just off camera as the scene was filmed. The parrot happily cooperated and was removed and secured by the trainers afterwards.