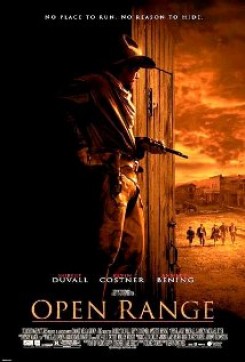 As the nineteenth century was drawing to a close in the American West, the freedom of the open range was diminishing and those who still chose to freegraze their cattle met violent opposition. Members of this dying breed of freedom loving cattlemen included Boss Spearman (Duvall), Charley Waite (Costner), Mose Harrison (Benrubi), and Button (Luna). As they freegraze their cattle across the vast western prairies, they live by a cowboy code of honor with a disinterest in encroaching civilization. Outside of the town of Harmonville, they encounter the opposition in the guize of a corrupt sheriff and a local land baron. As the inevitable showdown draws closer, they are forced to examine their values, demons and loner lifestyle.

Cattle on the Open Range

Two hundred and twenty five head of Hereford range cattle were used in the film with professional wranglers present throughout the shoot. The cattle were in a fenced valley where they had plenty of down time and available water.

Several scenes depict some of the challenges presented to the cattlemen as they tend the herd battling rain storms and natural obstacles. In one scene, the cattle are being herded across a stream. Young calves were separated out of the herd and not used for the scene. The river bottom was checked and cleared of debris and any holes along the banks were filled prior to filming. One calf is carried across the stream over the saddle of a rider. To achieve this, the calf was lifted by a wrangler onto saddle of the actor who crossed the stream holding on to the calf. Once they reached the far side, the calf was lifted down and reunited with its mother.

Later a young steer is herded out of the bush. The actor was prepped before filming began and the steer placed and held in position by an unseen wrangler who had a rope lead on the animal. During filming, the actor approached the bush and the wrangler passed the rope lead to the actor who then emerges from the bush leading the steer. All debris, sharp twigs and low hanging branches were cleared for the safety of the actor and the animal.

As often happened on the range, a steer becomes entangled in some barbed wire fencing. The steer was prepped over a 4 day period prior to the filming so it was comfortable laying down and having the prop wire lossly tied around it's legs. The wire was made of soft prop materials but appeared to be the real thing. The steer was gently laid down by wrangler and the prop wire was placed around the legs using fake stage blood to make it appear as if the barbed wire cut the animal's legs. A quick release rope was loosely around the steer's neck and released by an unseen prop person on cue. During the set up of the scene the steer even began to doze. When Charley finds the steer, he unwraps the prop wire, the neck rope is released and the steer gets up and walks away.

Traveling along with Boss, Charley, Mose and Button is Charley's faithful companion, Tig. Tig was played by a Mixed-breed Terrier named Chester. The dog appears hanging around the camp fire, playing with Mose and Button, running with the cattle and horses, and riding in the wagon with Mose. When Tig is seen riding in the wagon he was placed in a specially made seat that kept him from falling forward and secured by a waist tie held by an unseen trainer. The flickering campfire was also safe for the dog, since it was comprised of fake logs and a controlled propane firebar. Chester received pre-production training to safely be around horses and cattle and his trainers were always on hand to give the dog verbal cues and reward him with treats.

When the tyrannical kingpin rancher decides to send a warning message to Boss and Charley who he believes are encroaching on his domain by freegrazing their cattle, he chooses a particularly evil approach. He sends his thugs to the campsite when Boss and Charley are away and they use violence to satisfy their objective. Boss and Charley return to find Mose and Tig dead and Button severely wounded. Charley is overwhelmed with grief and anger as he carries Tig to a hillside grave. For this scene a fake double was used for Tig.

Relentless rain blankets the range and the town as Boss and Charley seek out their enemies and try to understand what they are up against. The rain causes flooding through town and the rushing water catches a small dog in its wake. Charley sees the dog struggling and reaches out to catch it up out of danger. In so doing, he makes a fast friend of the dog's owner, Mack.

Two dogs were prepped to play the part of Mack's dog. Both dogs were terrier mixes named Goldie and Boomer. The distance of the flooded area was approximately 25 feet and over the course of several takes the dogs traveled various lengths from 5 to 20 feet. The flood waters were carefully controlled and the water was kept at approximately 64 degrees. Takes were kept to a minimum with the dogs rotated so they would not get too tired or cold. The dogs' wranglers were nearby at all times, along with a warming tent, heating pads, towels and chicken broth always on hand.

The dogs were cued by a trainer using verbal, whistle and toy commands with one trainer releasing a dog and a second trainer out of sight at the other end to catch the dog. The actor was prepped to pick up the dog by the scruff and then quickly grab underneath its chest and place it on his shoulder. The dog was used to this since it is prepped to ride with the trainer on a horse – the dog jumps up to get a ride and is caught under the chest and by the scruff and then held securely by the rider. A fake matching double, was used in place of the live dogs for some angles.

Horses – An Integral Part of the Open Range

Horse are used throughout the film from mild scenes where they roam in a corral to being in the thick of the gunfight. They are used to herd the cattle and pull wagons. The three hero horses that were used by the actors were Baby, Apache and Soldier and were seasoned movie mounts. The spurs that the actors wear were costume accessories made of rubber. All paths traveled by the horses were checked for rocks and holes which were either removed or filled in before filming began. During any of the herding or gunfight scenes, professional wranglers were present amidst the actors.

For the climactic gunfight, "hunting" horses accustomed to the sound of gunfire were used. The guns were fired at safe distances from the horses and directed away from them. Generally ¼ loads were used, especially when the animals were needed closer to the actors in a particular shot. When full loads were used, the horses were far from gunfire and also had cotton in their ears. Professional wranglers created the appearance of the horses being agitated by using verbal cues or by strategically being positioned under the boardwalk to cue horses by tossing clumps of dirt at the ground to encourage movement or swishing a buggy whip at the ground. At no time did the whips ever touch the horses.

The horses used were rotated and watered at regular intervals and provided shade. When the horses are seen running down the street during the gunfight they were released by trainers and ran a familiar and controlled path to trainers waiting with feed buckets and water. These scenes were choreographed to safely integrate running people and horses.

Several thugs on horseback try to keep the townspeople from notifing the Federal Marshalls by pulling down the telegraph poles. A specially hinged pole was carefully placed and the direction of the fall controlled by special effects. The horses were a safe distance past their marks to keep them away from the falling pole. A trained rearing horse was used and the rain was controlled by rain towers and turned off between takes.

In the aftermath of the gunfight, horses appear dead or wounded. Makeup and fake blood was applied to the animal to simulate the bullet wound. The horse that appears wounded was prepped to limp using a loose fitting tie around part of its leg. Since the tie was foreign to the horse, the horse appears to limp in response to the uncommon element. By the third take, the horse was so used to it that it no longer limped - in fact, the clever horse found it could pop the tie by simply straightening its leg.

The other casualty was a horse named Red that was trained to do a lay down. The ground was cleared and softened with two inches of mud. After gently laying the horse down, the trainer cued the horse to begin to get up, but then told it to stay down. This gave the appearance that the horse was struggling. Another dead horse that is seen was actually a stuffy. Adding to the after-fight confusion were dogs and horses that were prepped to work together. All were choreogrphed to allow distance and pacing between actors, dogs and horses.

The Look of the Old West

Props were used to dress the set of the store "Sloan's Freshly Killed Meat" and were all fake dead animals. Other dead birds such as roosters or chickens were also supplied by the props department.

Background horses seen in the rainstorm only endured movie magic. Rain machines controlled the storm using warm water and the animals were given breaks, food, exercised and dried often. The horses seen tied to hitching posts in town during rain scenes were rotated and dried often as was the tack that they wore.

The townie dogs played by Maggie, Thistle, Arnold, Coco and Tango – all multicultural mixes – were prepped to be around horses with trainers always nearby, some in costume.