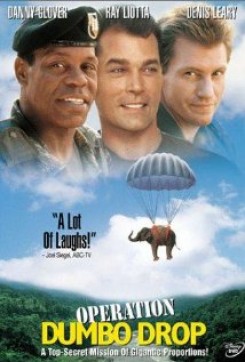 Operation Dumbo Drop, based upon a true story, is a warm and delightful adventure comedy about five Green Berets stationed in Vietnam in 1968 and the promise they made to the village of Dak Nhe in order to keep the Montagnard villager's cooperation. As the opening credits roll, you see a beautiful valley jungle scene with 12 elephants peacefully walking in single file carrying logs down a narrow river in the Northern Highlands of South Viet Nam. The year is 1962. Flash forward to January, 1968 to a ceremony in Dak Nhe. It is a farewell to Captain Sam Cahill and a welcome to his replacement, Captain T.C. Doyle. Custom has it that, amongst other things, the sacred elephant of the village must place his trunk upon Doyle's shoulder in a gesture of goodwill. After the ceremony, Cahill takes Doyle on a tour of the village where he stresses the importance of tradition and its meaning to the villagers. The Americans have been sent to this area to spy on the Ho Chi Min Trail used by the Viet Cong to transport ammunition and to report on the enemy's activity. On their way back to the village, Cahill and Doyle hear gunfire. Upon arriving at the village they discover that the North Vietnamese soldiers have shot the sacred elephant in retaliation for helping the Americans. The villagers now refuse all help to the Americans until the elephant is replaced. The problem is, they have only one week to find and transport the elephant from Saigon to the deep jungle of Vietnam. Cahill goes to the commanding officer of his squad and persuades him to assign the necessary men and supplies to this mission. Then he and Doyle set out to collect their recruits, none of whom are happy about being a part of the mission. They include, H.A. Ashford, whose sole purpose in life is to make it back to Miami Beach alive, Lawrence Farley, a naive Iowa farm boy who doesn't like anything on four feet and claims they don't like him either and Lieutenant Douglas Poole, a requisitions officer, who only agreed to cooperate after Cahill threatened to blackmail him. He reluctantly promises to locate an elephant named Bo Tat and take care of their travel arrangements. When they locate Bo Tat, they discover that they have to also include Linh, an orphaned boy of 12, who is the only one who knows how to communicate with Bo Tat. Their next problem is to get Bo Tat back to the village. They first try to transport her by plane. In order to do this they must tranquilize her. However, she comes to during flight and her moving around almost causes the plane to crash, so they must look for another mode of transportation. They start walking and come across a group of villagers trying to remove a tree stump from their rice field. Cahill loans Bo Tat to them to help pull out the stump, and in return they give Cahill a flatbed truck to transport Bo Tat. Everything is going fine until they stop to refuel and feed Bo Tat. While Cahill is fixing a radiator leak, Ashford and Farley take Bo Tat for a drink of water and the elephant spots a cart full of bananas. He takes off after the moving cart, knocking everything down in his path. Ashford, Farley and half of the villagers are in close pursuit. In the meantime, Cahill spots a Viet Cong spy and decides it is time to move on. They make it to a bridge where the truck expires. They are now right back where they started from. Cahill always said that when everything looks its worst something will come along, and sure enough it did in the form of a boat. While floating down river they encounter a boat full of North Vietnamese soldiers who proceed to fire upon them. Poole calls in a favor and the enemy is blasted out of the water by an airborne bomb. They finally reach their base and the commanding officer tells them to abort their mission because they no longer need the village as a cover. Cahill decides he must deliver the elephant no matter what the cost, even if it means a court-martial. When he tells the others about his decision, they all agree. No one is going to stop them now, not even the U.S. Military! Lt. Poole uses his resources once again to acquire a plane, a large parachute, and a crate big enough to drop ship a tank or, in this situation, an elephant. The soldiers and Bo Tat jump from the plane as the villagers look on in disbelief as their sacred elephant, in her crate, drops from the heavens. After their successful landing, Ashford receives a message that the orders have changed and they do, indeed, need the village once again. The villagers have their sacred elephant and the crack commando squad of Operation Dumbo Drop can breathe a sigh of relief as their mission comes to an end.

Animal action is throughout in this film with Tai, a 26-year-old Asian elephant, playing the part of Bo Tat. Tai was chosen for her part because of her calm demeanor, friendly disposition, and her experience as an animal actor which allowed her to be in scenes with simulated gunfire and still be relaxed. When Doyle and his group first try to move Bo Tat back to the village, they attempt to transport her on a cargo plane. In order to do this, they feigned sedating her. Actually she just did a lay down following her trainer's command. The sounds of snoring were dubbed in later. During the flight Bo Tat supposedly starts to come out of the sedation. She lifts her head, moves her legs and then stands. These were all responses to her trainer's commands. Her moving causes the plane to pitch. The cargo door opens and the pallet floor under Bo Tat starts to move towards the open door. This scene was shot on a hydraulic platform in front of a blue screen. It was crew members that moved the plane up and down. This was then superimposed in post production against the background. Tai was never in any danger, nor was she scared as she was used to traveling in moving vehicles. When her crate slips to the back and tilts off the edge of the open cargo door, the crate was actually secured to a fork-lift and surrounded by I beams which were painted out later. In the scene where Bo Tat (Tai) and the group are escaping on a marine boat, I-beams were placed under the deck to support it, and a portion of the deck was lowered to keep the elephant feeling secure and in position. Ballast was also added to the boat to keep it afloat. The boat had been pretested with significantly more than Tai's 8,000 pounds, so there was no way it could tip over, even though the elephant swam beautifully. When the North Vietnamese shoot at them, several cameras and angles were used to make it appear as though there was more gunfire than there actually was. In reality, the position of the boat was never actually near the gunfire or explosions. In the most spectacular scene, Bo Tat is wenched up into the cargo hold of a C-130 and parachuted down to the village, but not before a surface-to-air missile is shot past the plane and machine gun bullets hit the side of the cargo plane. In the fall Bo Tat's static line whips out of the plane unattached, so Doyle free falls to the crate and opens his chute which causes Bo Tat's shoot to open. This scene was shot in cuts with both fake elephants and a mechanical elephant being used in the jump. The real elephant was used only for close-ups. She was filmed in front of a blue screen only a few feet off the ground. Suspended by a crane, she was secured not only by her crate, but leg steel I-beams that surrounded the crate. In the scene where Bo Tat pulls the stump out of the ground, a deck was built to ensure she would not sink in the ground. When Bo Tat chases the banana cart through the village, the trainer, as an extra, ran along side her telling her to keep moving. There was also another trainer in front of her encouraging her constant movement and ensuring that nothing got in her path. Monofiliment wire was attached to crates and tables which were pulled over as she ran by, making it appear as though she were knocking everything aside. In a flashback the young boy, Linh, sees an elephant being shot as he tells of how his parents were killed. To accomplish this, the trainer merely told the elephant to lie down. The scene was shot in slow motion. In one of the beginning scenes the sacred elephant lifts his trunk and pats Doyle on the shoulder. This was accomplished by the trainer being just under the elephant's head, out of camera range. He cued her to hold her trunk "up" and to "touch it". There are other simple acts the elephant performs such as picking up bamboo poles. For this the trainer rode the elephant and cued her to pick up the poles as they went along. When you see elephants pulling logs, fake logs were used and Mahouts were riding the elephants to control their movements. After Cahill and Doyle return from their tours of the village, they find the sacred elephant dead. To accomplish this the trainer merely asked the elephant to "lay down". Other animals used as background were local cattle, chickens, and goats. Twelve local elephants were also used as extras in the mountain jungle logging scene. To ensure the over all health of Tai, her food and water, including her bathing water, was shipped from the U.S. to Thailand throughout the production. She was bathed in purified water every day. Young native boys were hired to hold umbrellas over her when the cameras weren't rolling and everything she walked on was reinforced with timber and steel.