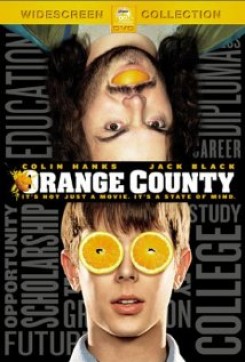 Stanford-bound over-achiever Shaun Brumder (Colin Hanks) has his college hopes dashed when his guidance counselor (Lily Tomlin) accidentally sends the school of his dreams the transcripts of a complete loser rather than his own stellar records. Jack Black plays his sympathetic stoner brother who drives him to Stanford to mend the error.

A Jack Russell dog heads out into traffic at the end of a driveway and Shaun's friend Ashley (Schuyler Fisk) runs to save it. Traffic was cleared and all safety precautions were in place for the dog for this scene. Later, the dog sits in the backseat of a car parked in the driveway. The dog is clawing up the backseat. Since Jack Russells are natural mousers, to prompt the dog to dig, the dog was shown a mouse being placed into a tube about 1 1/2 " in diameter that had holes in it and was capped at each end. The trainer then turned his back away from the dog and switched the tube holding the live animal for one that is 3/4" diameter and filled with sawdust and mouse droppings. This "fake" tube was placed in the car so that the dog actually is digging for the prop that smells like the mouse. The real mouse was released from the tube and placed back in its cage.

Later, a trainer cued the dog to hump an actress's leg. Ashley then picks up the excited pooch and holds it up to her face to kiss it. Unexpectedly, the dog snaps at her. She carries the dog over to the kitchen counter and sets it down. For this scene, the dog was cued to look up at a trainer perched above the actress from off-camera. On cue, the dog looked up at the trainer quickly, seemingly snapping at the actress.

Trainers cued the dog with verbal and hand signals to achieve the mild action in the remainder of its scenes, including lying on an actress's back as she sleeps, and standing on the couch. The dog was rewarded with ample treats for its efforts.