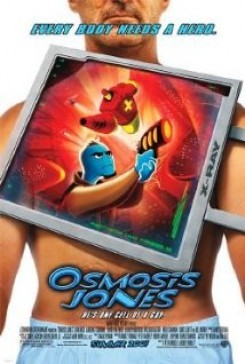 In this family entertainment comedy, a zookeeper, Frank (Murray), eats a hardboiled egg contaminated with the saliva from a monkey and his body becomes infected with a deadly disease. The film cuts from live action into animation as the immune system begins a cartoon rendition of the fight between good and evil. The good guys are in the guise of a white blood cell cop named Osmosis Jones (Rock) who partners with a cold tablet named Drixinol (Pierce) to fight the Red Death virus (Fishburne) throughout the inner City of Frank. As the film cuts back and forth from live action to animation, outside and inside Frank's body, the audience gets to see the personalities and locales that drive and define the bodily functions and dysfunctions.

It's All Happening at the Zoo:

Frank is a zookeeper who acts like a feral human being. Eating junk food, high sodium content snacks, beer and candy while being hygienically challenged makes Frank a disaster ready to happen. While talking with his young daughter outside the monkey cage, a monkey grabs Frank's hard boiled egg smothered in salt, they wrestle for the snack and eventually it drops onto the ground. Applying the ten second rule, Frank snaps it up and eats it anyway claiming if it is only on the ground 10 seconds or less it's "good"! Unfortunately, he is wrong.

The monkey was actually played by two chimpanzees. The trainer doubled for the actor as he and the chimp struggled over control of the egg. This wrestling match was play behavior for the chimp and his trainer. The chimp was given verbal cues to do several other behaviors like taking the egg, scratching, licking the egg, dropping it and also diving for it on the ground. The animal was rewarded with treats such as a banana and given lots of praise after filming.

All the animal scenes were filmed at a park location that was enhanced to look like a zoo. The other animals that appear were there as atmosphere. The camels got to lay about the pen and the elephant received a cooling bath.