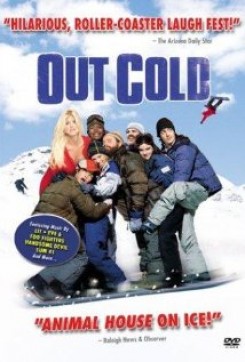 This ensemble comedy is a slobs vs. snobs story set at a ski resort. A snowboarder wants to start his own snowboarding park on a mountain. His plan goes awry when he and his friends try to gain ownership of the mountain.

There is a very memorable scene in this film with a Polar Bear. A young man who has passed out is taken out in the snow by his friends and left there, with his pants down and a block of ice between his legs. A big, white Polar bear approaches the young man and appears to lick the block of ice - which was actually made of salt - between the man's legs. At that moment, the young man wakes up and sees the Polar Bear and tries to shoo it away. The bear finally leaves the poor guy alone and retreats. Although AHA was not present on the set of this film, we spoke with the trainer, Mark Dumas, who explained in detail how this scene was achieved. Aggie the Polar Bear is 6 years old and was purchased by the trainer when she was 8 weeks old from a zoo in Switzerland. Aggie is a little shy around strangers, so Mark doubled as the actor in this scene, placing Aggie at ease. Also, Polar Bears in general do not like salt, and instead prefer sweet things like honey. Aggie loves chocolate, so the trainer held out a chocolate bar in his hands where the ice block was supposed to be, and Aggie was delighted to eat it. Another trainer that Aggie is familiar with stood off-camera to release her at the beginning of the scene and retrieve her when the scene was over. When her work was done, Aggie went home to enjoy her own pool at the trainer's 10-acre compound in Canada.