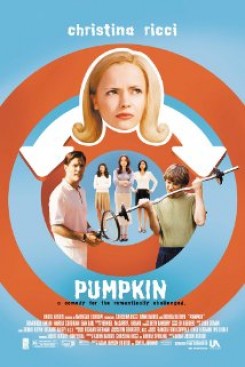 Pumpkin is a dramedy about the meaning of individuality in an age of complexity and peer pressure. When a college sorority chooses to sponsor an Olympics for physically challenged kids, a popular sorority girl, Carolyn (Ricci), encounters a young man named Pumpkin (Harris). Wheelchair bound and saddled with the maternal endearment, "Pumpkin," he falls head over heels for his pretty mentor. However, it's Pumpkin who becomes the real teacher and who makes her question her values and the values of her friends. Not only does she learn who she is, but she inspires Pumpkin to challenge himself and transform into her prince.

Carolyn has been insulated from life by her popularity and in encountering Pumpkin she tries to do something from the heart. For this, she is criticized, ostracized, and, for the first time in her life, falls into a deep depression. As she wanders in the depths of alienation she encounters two mice in a walkway, flies in food, and a dead pigeon. The rats were placed by a trainer and hung out in the alley nibbling on peanut butter. The flies were released by a professional bug handler and appeared to like their freedom. The dead pigeon was a taxidermy prop that was rented for the film.

Other animals include several live chickens that meander in the front yard of a boarding house. The chickens were placed on their mark by a trainer who sprinkled some feed around to supply their motivation.