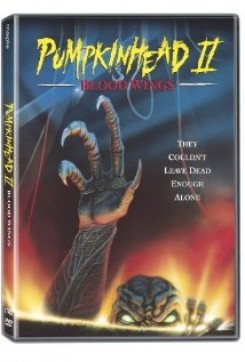 Pumpkin Head II, the sequel to Pumpkin Head, is the tale of a ghoulish creature who terrorizes an entire town, relentlessly murdering anyone who crosses his path. Mr. and Mrs. Broadrick and their daughter Jenny move back to Mr. Broadrick's home town where he has accepted the position of town sheriff. When Jenny, a somewhat rebellious teenager, starts school, she falls in with a rowdy group of kids. One evening, being bored, they all decide to take a drive. As they are racing down the highway, they run over an old woman who appears out of nowhere. They stop the car and run to the place where they struck the woman, only to discover she is gone. One of the kids had recognized the old woman as the woman everyone believes to be the town witch. They all jump back into the car and head out to her house. When they arrive, they are confronted by the old woman who puts the curse of Pumpkin Head on them. Their lives will never be the same.

In one scene a group of local lowlifes are gathered around an arena where a cock fight has supposedly just taken place. The victorious bird is carried out of the ring by it's owner while the other is left on the ground, twitching as it dies. No cock fight is shown or took place. Stage blood was placed on the bird which is carried and the bird lying on the ground was a fake mechanical bird. In another scene Pumpkin Head picks up a terrorized man and flings him head first into a cage containing fighting cocks. Instinctively the birds attack his face, beginning to peck his eyes out. This scene was shot in cuts. No real birds were present for this scene. Fake mechanical birds were used in this scene also. Other animal action included a dog lying on a porch as atmosphere and goats in a pen being fed.