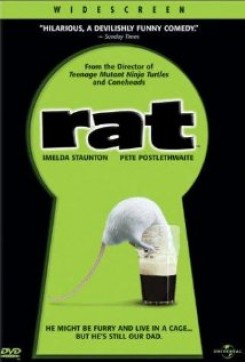 Hubert Flynn (Pete Postlethwaite) from Dublin loves his pint of Guinness, his bet on the horses, and his wife Conchita (Imelda Staunton), in that order. So when he comes home from the pub one evening and changes into a rat, she is slow to forgive.

The Rat was filmed on location in Dublin and Ardmore Studios in Bray. The Irish Society for the Prevention of Cruelty to Animals monitored the production per AHA Guidelines.

During scenes in the pet shop, a real pet shop was featured, and thus, real animals. Every effort was made to ensure that no contact came between the animals and those involved in the film.

When the rat is required to run, the action is achieved by use of a specially designed wooden box. The box has two compartments in it, one of which housed two female rats while the second was completely separated from the first with wire. The box was fitted with a buzzer to attract the rats to it. They were trained to know that the females were in the box and traveled up to twenty feet to get to the buzzer and a chocolate reward. In addition, to prevent any rats from escaping during exterior shots, the set was sealed off and guarded. Specially constructed boards about twelve to eighteen inches in height were placed around the perimeter to prevent escape.

Some scenes required the rat to be wheeled in its cage or in the pram (a baby carriage) by a cast member. The animals were kept in comfortable cages when not needed on the set. Trainers and a veterinarian were also present to ensure that the rats were safe during filming.

Cast members were required to handle the rat throughout the film. On each occasion, the actor is instructed by the trainer on how to hold the rat to minimize the risk of injury. All of the actors became adept at handling the animals.

Fake stuffed rats were used when Conchita throws Hubert over the fence at the maggot factory and hangs him out on the clothes-line to dry. Animatronic rats were used when the rat bites Conchita, when the rat is washed in the washing machine, and when it falls into the pint of beer at the pub. The beer that was applied to the real rat after it falls into the pint was warmed to the rat's body temperature before applying. After the scene was over, the rat was cleaned and blow dried by the trainer and was the envy of all the other rats that day!

Anytime you see the rat being held by its tail, rest assured that it is not putting any stress on the animal. Filmed in front of a blue screen, a veterinarian held the rat's tail erect as the trainer—wearing blue gloves so that his hands appear invisible—held the animal underneath its chest, holding the full weight of the rat and ensuring no damage to its tail.