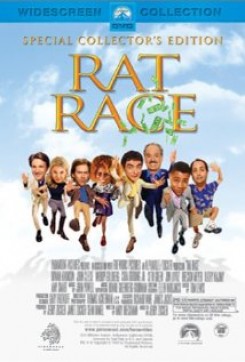 Rat Race is a zany comedy that pits contestants against each other on a quest to find a two million dollar jackpot stashed somewhere in New Mexico. A sleezy casino owner (Cleese) cooks up the scheme so that some of his high rollers can place multiple bets on the contestants and track them while they race against time and each other for the prize. En route each contestant finds creative ways to beat the clock: Owen (Gooding Jr.) commandeers a busload of Lucille Ball impersonators on their way to a Lucy Convention, a mother and daughter duo (Goldberg and Chapman) have a run-in with "Squirrel Lady" (Baker), Enrico (Atkinson) hitches a ride with an organ donor delivery truck, Nick (Meyer) has an airborne cow encounter while dangling from a balloon, the Cody brothers (Vieluf and Green) have their own cow encounter and Randy (Lovitz) steals Adolph Hitler's limo. And the winner is...?

Animals somehow manage to foil the contestants along the way. The critter cast includes squirrels, cows, horses, a dog and several animals that ended up on the cutting room floor including a rabbit and some snakes. There are also some fake stunt doubles filling in for the live featured creatures.

Greedy Vera and her daughter Merrill decide to take a route through the desert but stop along the way for directions. Squirrel Lady's roadside abode is home to crowded cages that contain squirrels she hopes to adopt out to random travelers. She coos at her little wards and obviously feels passionately about them, some of which are dressed in fancy little skirts and collars. Although Squirrel Lady offers a route back to the highway, the anxious contenders refuse to buy one of her furry little darlings. However, they soon find that Hell proves to have no fury as that of a Squirrel Lady scorned.

Ten squirrels were used in the scene: Isaac, Peter, Jaime, Samantha, Carrie, KC, Billy, Chatter, Chester and Hazel. All the animals were placed by trainers into the cages just before filming began and removed immediately once the scene was over. The animals had treats in the cages such as peanut butter, jelly and and nuts to keep them busy. The costumes were put on some of the squirrels just before cameras rolled and were very loose fitting and fastened with velcro. A taxidermy squirrel was also used for longer sequences and to wear one of the costumes.

Nick, having been a reluctant contestant, finally gets into the thrill of things and manages to find an air balloon to transport him. The trouble is he actually doesn't get into the basket but finds himself dangling from it. As the balloon careens over a cow field, Nick is uncontrollably flung against the cows. As if this isn't enough, Nick is pursued by the Cody brothers who also look to cash in themselves. They chase Nick and the balloon in a convertible on the ground and maneuver through the cows until one cow is snagged and lifted into the air. The cow later drops into the convertible and takes the wheel giving new meaning to the term "cattle drive."

Although the cows in the field appear to take a hard bump from the flying contestant, they were merely eating and were mildly startled. For the scene, ten cows were staked in the field and supplied with lots of hay and grain with loose cows in the background also enjoying the feed-for-all. When the cow appears to be hit by the actor it was a controlled stunt, from a construction crane. Furniture pads and foam barriers were used between the cow and the actor to buffer the blow. When the convertible makes its way through the herd, a stunt driver was controlling the vehicle at a slow speed and at a safe distance from the animals. Pick up riders were in place to direct any cows away from the path of the car in the event one decided to wander near the moving auto.

The bovine lifted into the air and later deposited into the convertible was an animatronic double for the real cow. The flying double was fiber-filled like a stuffed animal so that if it accidentally made contact with a live cow it would not hurt it. The wranglers had several weeks to prep the live cows for the filming of this sequence and the cows were more interested in the feed than the flying prop. For any of the scenes involving the live cows, trainers and wranglers were always present to tend to their needs.

A Dog with A Heart:

Enrico is a narcoleptic contestant who loses a lot of time dozing off, occasionally in mid-stride. When he awakens he realizes he needs to make up the lost time and manages to hitch a ride in a delivery truck that is carrying a heart for an immediate transplant. Enrico and the driver become curious about the contents of the "cooler" and their curiosity proves to be a fatal error. Through clumsy circumstances the heart is flung from the truck and into the roadside bushes. It is discovered by a wandering canine that dashes off carrying the heart in his mouth only to have a tragic mishap with an electrified fence.

The dog was trained to run carrying the prop heart in its mouth. Trainers cued the dog and rewarded him after filming. The dog who encounters the fence was a fake stuffie that was engineered to match the live animal.

As the contest starts careening to a climax, all the contestants converge down the road into Silver City. Owen rides in on a horse that he found along the way after ditching the bus of Lucy's, while the cow drives in steering the convertible. For this scene the traffic was controlled and trainers close at hand. When Owen jumps off the horse to make a final run for the gold, trainers were on hand to immediately take the reins.

Needless to say, the cow was an animatronic.