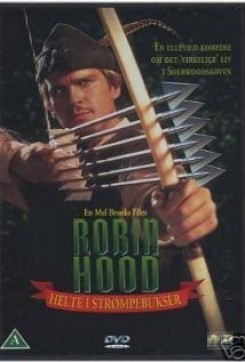 Robin Hood: Men in Tights is a farce that takes place in medieval times but with the language of and the reference to places and events in modern day America. At the opening of the picture, Robin Hood is thrown in prison with Asneeze, but the two of them are able to escape and in the process they free all of the other prisoners. Everything is exaggerated in the picture to the ridiculous, as is Robin Hood's method of getting to England - he swims. There he teams up with Ahchoo, who takes him back to his father's castle, Loxley Hall, just in time to see it being taken away on wheels because of back taxes. After the castle is removed only Blinkin, the faithful blind servant, is left. Through Blinkin, Robin Hood discovers that all of this family is dead. The only thing left was a key, in an encasement, which his father had left to him, stating that it would lead to the greatest treasure in the land. In his travels Robin Hood meets up with the Sheriff of Rottingham. They argue and Robin Hood cuts the straps on the Sherriff's saddle which causes Rottingham to swing underneath his horse. The horse then takes off with Rottingham still hanging upside down. Blinkin joins Robin Hood and Ahchoo and they all take off to see Prince John whom they say they will fight to free England from it's tyranny. On the way, they meet up with Little John who joins them. Rottingham goes back to Prince John and tells him that Robin Hood wants to kill him. In an effort to avoid this, Prince John visits Latrine, a witch, who lives in the tower. He asks for her help. She, being in love with Rottingham, tells Prince John that she will help him if he will provide Rottingham for her. In the mean time, Robin Hood sees the Maid Marian and they fall in love with each other. Rottingham hires a hit man to kill Robin Hood. The Maiden, hearing of this, jumps out of her castle window onto her horse and gallops away to find Robin Hood and alert him. It is there that she informs Robin Hood of her chastity belt. Robin Hood is taken prisoner and is going to be hung but the Maiden promises to marry Rottingham if he will spare Robin Hood's life. The Maiden, at the last moment , backs down when she realizes that Robin Hood has been freed by his fellow travelers. In the mean time, the encasement holding the key left to Robin Hood by his father is broken and he discovers that the key fits the chastity belt that the Maiden is wearing. As in all good fairy tales, Robin Hood marries his maiden and regains his father's property, but alas, after the wedding ceremony Robin Hood discovers that the key, while it fits, does not really unlock the maiden's chastity belt after all.

There are several scenes where animals are used. Horses are ridden throughout as the mode of transportation. When Robin Hood arrives at a banquet that Prince John has given, he arrives with a dead pig across his shoulders which he throws on the table. This was a fake pig. When the Maiden jumps from the balcony and lands on her horse, it was a stunt double who actually lands on a platform not on the horse. Then the stunt double jumps approximately three feet off camera onto the horse's saddle which is padded. This was accomplished by the wranglers giving verbal and visual commands to the horse. Also, Broomhilde, jumps from the balcony. Her horse, sensing that Broomhilde is heavy, moves, causing her to land on the pavement. This scene was accomplished by the wranglers positioning the horse and giving it a verbal cue to move. In the scene where the Sheriff of Rottingham rolls over upside down on his horse, the scene was shot in cuts. The Sheriff was seen sitting on a real horse. A fake horse was substituted when the Sheriff rolls over upside down. In another cut the real horse was seen trotting off to his trainer who was off camera. You see what you think is the Sheriff hanging upside down on the horse. In this particular cut, it was a dummy Sheriff who was hanging under the horse. In one scene in the Maiden's quarters, a trained blue bird flies in and lands on the Maid Marian's hand. For this scene trainers off camera gave verbal and visual cues to the bird. It was released by one trainer and received by the other with food as a reward. Other animals seen are a fox which is sent off to alert the villagers with a message strapped to him, and a mule is seen pulling a wagon.