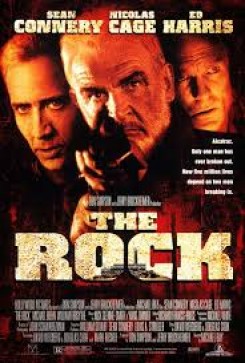 The Rock is a film about General Hummel, a decorated war veteran, who after the death of his wife decides to right some wrongs committed by the American government towards deceased soldiers and their families. Many of his men on top secret missions were killed in the line of duty. Since they were secret missions, no one could know the real reasons for their deaths. Therefore, their families were told anything from "They were missing in action" to "They went AWOL." The soldiers were not given military funerals and some family members held false hope for years or thought their sons died in disgrace, not the heroes they really were.

To bring attention to and ultimately right this wrong, General Hummel, along with a hand full of loyal soldiers, take over Alcatraz with 81 tourists as hostages and threaten to launch 6 rockets over San Francisco containing a deadly gas. If launched, the rockets could kill everyone in the Bay Area. The FBI has only one chance to rescue the hostages and dismantle the rockets. They must bring in a military prisoner, John Mason, British Intelligence, who was captured thirty years earlier after successfully stealing micro-film containing top secret information. Mason had been held all these years without hope of a trial because he would not tell intelligence officers where he hid the micro-film. He was also the only man to successfully escape Alcatraz. The FBI needs his knowledge of an escape route to get into the prison. A group of Navy Seals and FBI Agent Goodspeed, a specialist on Chemical/Biological Weapons, proceed to Alcatraz/the Rock with Mason in hopes of dismantling the weapons and capture General Hummel and his men.

After getting into the prison, the Seals are surrounded by General Hummel's men and when they refuse to lay down their weapons, they are killed. Now the only survivors from the mission are Agent Goodspeed and Mason. Mason's chance for escape and freedom has finally arrived. However, he has a daughter in San Francisco and she would die along with Goodspeed's fiancé and unborn child if he did not stay and help. Together the two men forge a respect and friendship between each other and beat the odds.

In the beginning of the film, Goodspeed and Isherwood, a co-worker, are called down to the lab to inspect a suspicious crate found at the airport. The FBI believes that there could be a bomb inside containing poisonous gases. Goodspeed and Isherwood enter the secured area in rubber suits and approach the instrument table in front of the crate. A glass container with tiny air holes is lowered from the ceiling. Inside the container are about a dozen cockroaches. The two men open the crate and start to examine its contents, finding kitchen utensils and a doll. When Isherwood lifts the doll out of the crate its eyes open and it expels a pinkish gas. The spray of gas hits Goodspeed's arm and Isherwood's palm. The roaches in the glass container start to convulse and one explodes, splattering its guts all over the walls of the container. This scene was filmed in cuts. Real and fake cockroaches were used. Real cockroaches were placed in the plastic container by the wrangler for the shots of the cockroaches naturally roaming around inside the perimeter. For the segment of the convulsing cockroaches, the real cockroaches were replaced by fake mechanical cockroaches. The cockroach that explodes was remotely triggered and the guts of the cockroach seen on the container was actually a mixture made up by the prop department.

There are two scenes where pigeons are seen. The first scene is when Mason has thrown the director of the FBI over the balcony at the Fairmont Hotel and the director is hanging by a rope attached to Mason's hand. While the director is dangling in the air, his movement disturbs a flock of doves and they fly at him and away. The other scene is at a park when Goodspeed is approaching Mason after he has escaped. There are some pigeons seen in Goodspeed's path on the ground and as he approaches, they fly off. Racing homing pigeons were used for both scenes. The trainer merely released the pigeons who then flew back to their compound. Approximately 20 pigeons were used for the scenes.

After dismantling all the rockets, Mason, before disappearing, tells Goodspeed where he hid the microfilm. Later Goodspeed is seen running out of a church towards an old beat up car with a preacher in hot pursuit. Inside the car are Carla, his fiancé, and their pet dog. After he reaches, the car Carla drives away and Goodspeed proceeds to open a worn out canister that he took from the church. Inside the canister is the spool of micro-film that Mason stole thirty years earlier. For this scene, the trainer merely placed the dog in the car on his mark and told him to stay.