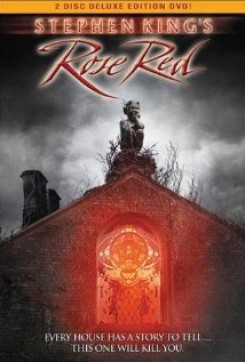 A professor takes some of her psychic students on a field trip to an allegedly haunted house called Rose Red. They spend the weekend together, each attempting to discover what happened to the old house, which seems to come alive before their very eyes.

There are several scenes with horses during a series of flashbacks. Two horses pull a cart alongside a trolley car. Other horse-drawn buggies and carts ride down the street and one horse-drawn carriage approaches a house. The trainers and owners all doubled as actors in these scenes. The wagons and buggies were all supplied by the horses' owners, who travel the Pacific Northwest doing period exhibition shows. The street was closed off to traffic and swept for debris prior to filming, ensuring it was safe for the horses.

Buddy, the neighbor's dog, snarls and growls at one character and her sister. Buddy grabs the pant leg of one of the girls and then the dog is thrown into the air and flies backwards. Buddy was played by a female Jack Russell Terrier named Poppy. Poppy was trained to growl and grab the pant leg on command; she thinks of it as a game. A trainer set the dog on its mark and stood off camera using hand signals to cue the dog to snarl and growl. The trainer, dressed as the young actress, wore the pants that the dog grabbed in its mouth upon verbal command. For Buddy's toss, the trainer held the dog in front of the camera and began walking backwards away from the camera, holding the dog up. Later, in post production, the trainer was edited out and the film was sped up to make it appear as though the dog was flying backwards. At the end of this scene, Buddy stands and pants as his owner approaches. The trainer merely put the dog on its mark and stood off camera to supervise.

In several scenes, crows peck at a dead body. The cast of pied crows included Jeckle, Max, and Coby. The trainer hid pieces of raw meat in the body dummy to prompt the birds to peck at it. A trainer placed two birds on the dummy, which then happily pecked away to get at the treats inside. To retrieve the birds and make them fly off of the dummy, a trainer standing off camera held a crate with food inside and called to the crows, which eagerly flew inside for their edible reward.

In one scene, a character shines a flashlight on a rat, which sits up and squeals, then runs under some pieces of wood lying on the ground. The rat was animatronic and the squeals were sound effects added later, in post production.

The bees, bugs, and worms were all computer generated.