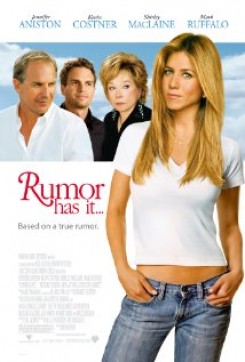 Proverbial black sheep Sarah Huttinger (Jennifer Aniston) returns to her childhood home in Pasadena, Calif., to attend the wedding of her eternally perky younger sister. Newly engaged herself, Sarah is beset with prenuptial jitters and learns that her late mother felt the same way before her own wedding 30 years ago. As the story unfolds, it becomes apparent that the famed book and movie The Graduate was based on the romantic exploits of Sarah's mother and grandmother. This news sends Sarah into a tailspin as she tracks down the man who may be the biological father she never knew existed.

Aunt Mitzi (Kathy Bates) holds a Yorkshire terrier mix in her lap during the conversation with Sarah on her porch. This dog, Bates' personal pet, responded to its owner's cues and was cared for by the actress's assistant when not on camera.