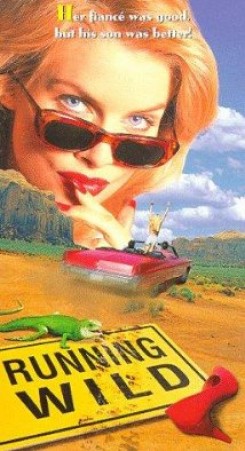 Running Wild is about Carlotta, a wild and promiscuous young woman. Carlotta is getting married and the night before the wedding her fiancee, Vince, invites his son, Frankie, and his friend, Miller, to come to the house to celebrate. Frankie takes one look at Carlotta and becomes enamored with her sultry good looks. Carlottta and Vince retire for the evening with Frankie and Miller doing the same. Later that night Carlotta goes into the kitchen for a drink and finds Frankie sitting at the table. Carlotta and Frankie can feel the chemistry between each other. This leads to a passionate sexual encounter. In the meantime Vince wakes and notices Carlotta is gone and goes in search of her. Vince walks in to the kitchen to find his son and future bride in a sexual embrace. He is furious. Carlotta runs out of the room as Vince goes after Frankie. Frankie escapes his father and collects Miller and their things to make a quick exit. Vince turns his attention to Carlotta and finds her packing a bag trying to make a fast getaway. As Vince chases Carlotta through the house, she jumps out of a window and lands in her car. Frankie and Miller are already there waiting, so she has no choice but to take them with her. Thus, begins their journey to get to Mexico with Vince never far behind.

This production was filmed in Mexico and the animal action was done by locals using their own pets. In one scene a boy is riding a horse through the streets in Mexico. He rides the horse into a cantina. Then later, outside in the street the boy and horse start to dance when the band plays. The boy and his horse are actually part of a team that performs at the rodeo in Mexico. In another scene a man is standing in a cantina with an iguana on his shoulder. Later the animal is seen sitting on a table. The iguana was not scheduled to be used in this production but the director had seen this man and his pet on the beach. Thinking it would be nice to have the iguana in the film, he asked for the owner's permission. The owner was present with the iguana throughout the shoot. As they were filming the countryside you could see locals homes and their animals in the background. These animals were not part of the production.