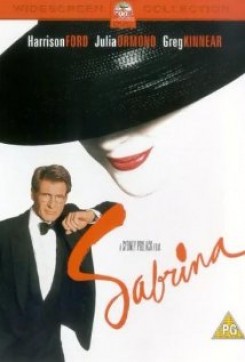 Sabrina is a remake of a 1954 romance movie about two brothers, Linus and David Larabee, and the young woman with whom they fall in love. Linus Larabee is the oldest of the two brothers. He is a corporate mogul that lives, eats and breathes the family business. Linus has never married or really ever had the time for romantic inclinations. But what Linus lacks in boyish charm and good-looks brother David has more than an abundance of. David Larabee is a playboy and rarely has time for the family business, but he can always find the time for a pretty face. These two brothers have their lives turned up side down by a mere slip of a girl that they have known all their lives, Sabrina the chauffeurs daughter. When Sabrina comes home from a two year stay in Paris, she is grown. David hasn't seen her during these two years and he is immediately bewitched by her beauty and charm. He completely forgets about his fiancee, Elizabeth, and their pending marriage, but is quickly reminded of his obligations by Linus and his mother. They want David to marry Elizabeth for more reasons than it being a good match. It will also be a financial merger between two companies. Therefore Linus must stop this infatuation between his brother and Sabrina at any cost. What he does not figure on is falling in love with her himself.

The animal action in this film is minimal with the use of a poodle in the background in three scenes where the trainer merely released the dog and with the use of voice commands called the dog to his next mark.