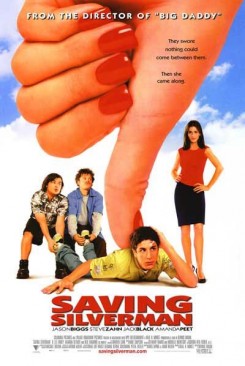 Darren Silverman (Jason Biggs) is about to make the biggest mistake of his life„heÍs engaged to marry Judith (Amanda Peet), an ice queen who always gets what she wants. His bonehead buddies Wayne and J.D. attempt to save Darren from JudithÍs clutches before itÍs too late

Wayne (Steve Zahn) is a self-employed rodent wrangler. He receives an assignment to relocate a raccoon living in a residential yard. Wayne finds the baby raccoon nestled in a bucket behind a door on the side of the house and gently lifts it out of its nook. Suddenly, the babyÍs mother, a rather large and menacing raccoon, leaps onto WayneÍs head. A wrestling match ensues--Wayne flings the angry mother off and shoots it with a tranquilizer gun, but to no avail. The resilient rodent leaps back onto WayneÍs head until he flings it off again and runs away. While the baby raccoon was real, the mother was actually a fake stuffy. The baby was placed in the bucket by a trainer and retrieved from the actor immediately afterwards.

Later in the film, J.D. (Jason Black) accidentally shoots the tranquilizer gun and implicitly hits a cat„the scene is shot in the dark so itÍs difficult to see anything. Actually, no cats were used during filming and the screeching noise was a sound effect.