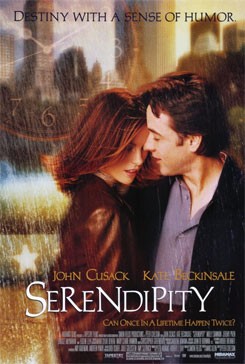 A couple reunite years after the night they first met, fell in love, and separated, convinced that one day they'd end up together.

Jonathan and Sarah get into different elevators at a hotel to see if they will pick the same floor on which to get off. They do pick the same floor, but Jonathan's elevator picks up some people along the way. As the elevator doors open, several people come out including a woman who has a small dog on a leash. Although it appears as if the dog is resisting on the leash, the trainer, who is standing inside the elevator off camera, is using hand signals to get the dog to act exactly that way. The trainer retrieved the dog and gave it a treat after the doors to the elevator closed.

Later we see a man walking a Dalmatian on a leash. Jonathan and his friend, Dean, pass by and we see Jonathan's leg get tangled in the leash. The dog jumps up on Jonathan who pets the pooch and steps over the leash to exit. Sarah is around the corner next to a person dressed up as a big golf ball. This time the Dalmatian's leash gets tangled on the golf ball's legs, the dog jumps up on the golf ball man and then stands by his owner as the leash is untangled. The Dalmatian's real name is Stumpy and he is 1 1/2 years old. Stumpy's trainer doubled as the actor and appeared by the dog's side throughout the scene, making it easy to give verbal commands to the dog to get it to achieve the action.

Birds are filmed flying in two scenes during the film. One scene takes place at a boat terminal and the other is in the park where the birds took flight naturally.