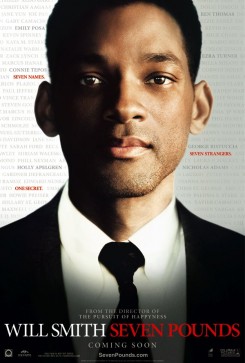 While struggling with a painful past, Ben Thomas (Will Smith) tries to make an impact on the lives of strangers with medical and financial problems, in hope of giving them a happy and normal life.

Dog and Fish
Two Great Danes named Jack and Bobby alternated in the role of Duke, Emily’s (Rosario Dawson) dog. The cast and crew were introduced to the dogs and instructed on their proper handling before filming began. All grounds were checked for safety before filming. Only limited cast and crew were allowed on set during filming. For such mild action as being walked on a leash, sitting, lying on the grass or the patio, jumping, or putting paws on a fence, off-camera trainers cued the dogs to perform the mild action, which they were accustomed to doing.
Ben drives up to Emily’s house as Duke stands on the front lawn, and then Duke barks as Ben approaches.
A trainer placed the dog on his mark and stood just off-camera, cuing the dog to stay and bark. The car moved slowly and the dog was kept a safe distance from the car and the street, which was closed to traffic.
Ben is in the backyard with Duke, who eats something Ben has fed him. Ben then tries to teach Duke not to pull on the leash, as they walk with Emily. A trainer placed the dog on his mark and stood off-camera as the actor handed the dog a piece of foil with dog food on it. The well-rehearsed actor then walked the dog on a leash while the trainer walked with them, just out of camera range. The trainer called the dog, who walked toward him, and the actor pretended the dog was pulling on the leash.
Emily walks Duke on a leash, and they cross the street and approach the house. When Emily passes out, dropping the leash, Duke runs into the yard. The actress walked the leashed dog to the house and fell to the ground, just as a trainer hiding in the yard called the dog to come and retrieved the dog.
While walking Duke on a leash, Ben carries a plastic bag containing Emily’s pet fish. He takes the animals to his motel room. The trainer instructed the actor on properly walking the leashed dog and holding the bag. Ben then places the fish in an aquarium containing a jellyfish, which appears to wrap itself around the fish to eat it. All jellyfish scenes in this film involved a fake jellyfish, and the action of it wrapping around the fish was computer-generated.
For the scenes in which Duke lies or stands in the backseat of the car with his head out the window, the prop car was on a slow-moving trailer and the trainer hid in the car.