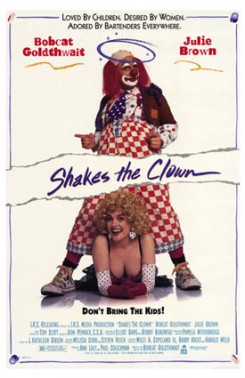 Shakes the Clown is a strange and sordid story of a community of clowns, who despite their outward appearance, lead depressing and desperate lives. The story focuses on Shakes, a particularly troubled clown, with a severe drinking problem. Because of his alcoholism he's losing jobs and having difficulty with his girlfriend Judy, a waitress and champion bowler. He spends his spare time at a bar that caters exclusively to clown patrons. One evening a man is murdered at the bar and Shakes becomes the prime suspect after being framed by a rival clown.

Animal action is minimal. At a child's birthday party a dog wearing a party hat eats pizza and a child rides a pony. A poodle is seen as part of a T.V. show that patrons at the bar are watching. As Shakes is driving his car, late for a booking, he slams on his brakes to stop for a duck and her chicks that are crossing the road. This scene was shot in cuts, focusing primarily on Shakes reaction inside the car. Then the ducks were filmed crossing the street. The car was traveling at about five miles per hour and stopped three feet in front of the ducks. The ducks were crossing toward food that was placed out of camera range.