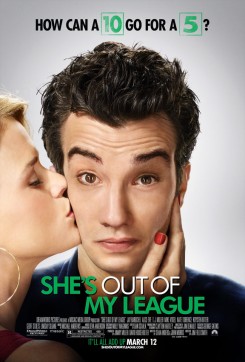 She's Out of My League

An average Joe meets the perfect woman, but his lack of confidence and the influence of his friends and family begin to pick away at the relationship.

An English mastiff named Oswald played the part of Molly’s pet dog, Captain Pickles. When Capt. Pickles is first introduced, he is barking at Kirk, who enters the apartment with Molly. The dog watches the couple as they sit and talk and then begin to kiss and caress on the couch and floor. Molly’s parents make a surprise entrance into the room.
Kirk quickly sits on the couch and puts a pillow over his lap to cover a wet spot on the crotch of his pants. Capt. Pickles approaches Kirk and begins to bite at the pillow, which tears open, causing feathers to fly all over. The dog then begins to lick the crotch of Kirk’s pants. Kirk gets the dog off him and leaves the room. This scene was filmed in separate shots. For the first part of this sequence, a trainer placed the dog on his mark and then stood off-camera holding a toy or bait stick to get the dog to look, walk in a certain direction bark. The second part of the scene involved the trainer telling the dog to “go get it” and to play tug of war with the actor and the pillow. The actor’s pants and pockets were lined with treats, and the wet spot was bacon juice, which the dog was cued to lick. A trainer then called to the dog to come to him.
For s shot in which Molly’s mother pets the dog, trainers placed the dog on the couch and cued him to stay while the rehearsed actress petted him.