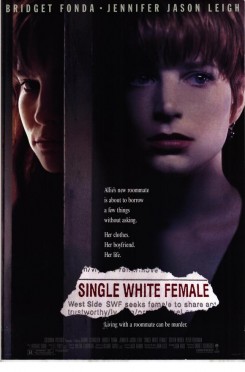 Single White Female is a thriller story involving deceit, jealousy and murder. Ali, a fashion designer, has just broken up with her fiance, Sam, after finding out he is still sleeping with his ex-wife. She decides to get a roommate and places an ad in the newspaper. After seeing several women who answer the ad she finally decides to rent to a young woman named Hedy. Hedy is a very plain, introverted girl, and, unbeknown to Ali, also a psychopathic killer. As Ali goes about her normal daily routine she notices that Hedy is becoming more and more like her, even in appearance. When Hedy has her hair dyed red and cut to match Ali's exactly, Ali finally realizes that something is terribly wrong with the girl. When Ali confides in her best friend, Graham, who lives upstairs, Hedy overhears Ali plan to have Hedy move out. Hedy becomes enraged and sets her plan of terror into motion. She must prove to Ali that all men are wicked and that Ali can never leave her.

Hedy has purchased a Golden Retriever puppy for Ali to keep her company and to take her mind off Sam. In one scene Hedy is sitting in a chair eating ice cream and the dog comes over and sniffs at her shoes. At this point Hedy kicks the dog away. For this scene the actress merely pushed the puppy away with the side of her foot. The dog was not kicked and was not harmed. Sound effects were added in post production to create the image of the puppy whimpering. In one scene Ali and Sam have decided to reconcile. They return to Ali's apartment and discover that one of the living room windows has been left open and that the puppy has fallen five stories to his death. The puppy that is seen on the ground below is actually a fake toy puppy with stage blood applied to it. In another scene Ali is hiding from Hedy above the pipes near the basement ceiling. She comes across a mouse and pushes the mouse down onto Hedy's shoulder. Hedy screams and knocks the mouse onto the floor. This scene was shot in cuts. The mouse was placed on the pipe by his handler and then dropped approximately one foot into a second handler's hands. A fake mouse placed on the actress' shoulder, was the one that was knocked to the floor. Other animal action includes a scene with Graham holding, petting and sleeping with his cat, Carmen. The puppy is also seen sleeping, playing, barking and eating. Although American Humane was not present for all of the animal action, as some of it was unscripted, we were present for the majority of it. After conferring with the production company we are rating Single White Female "Believed Acceptable".