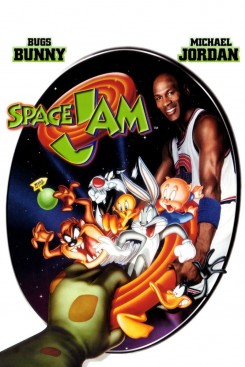 Space Jam is a film about an evil alien amusement-park owner who sends his alien squad down to earth to kidnap the Looney Tunes. However, Bugs Bunny convinces the aliens to play a game of basketball, to determine whether or not the Looney Tunes will have to go back to the alien's amusement park, Moron Mountain.. Since the aliens are not familiar with the game of basketball, they decide to steal some talent from a few NBA players and Bugs recruits Michael Jordan.

There is a scene where Jordan arrives home and a dog is seen lying in his dog house. When he sees Jordan he starts growling and runs towards him, leaping into his arms. Jordan and the dog are then seen lying on the ground after they supposedly fall from the impact. The dog happily licks Jordan's face until a woman approaches and pulls him off. This scene was shot in cuts. The dog ran from A to B when cued by his trainer. A fake dog was used for the shot of the dog leaping into the air. When the dog is seen licking the actor's face the trainer had applied juice to the area. Other animal action consists of a few shots of the dog with a pair of shorts in his mouth and several scenes with him and the Looney Tunes characters. In the scene with the Looney Tunes, Jordan's children come into the room and see the dog with the shorts in his mouth. One of the children grab the shorts and pull on them trying to take them from the dog. The dog and the child are never seen in the same frame during the shot. The dog was merely responding to cues from his trainer. Many of the shots in the film involving the dog were shot before a blue screen and inserted in post-production along with the sound effects.