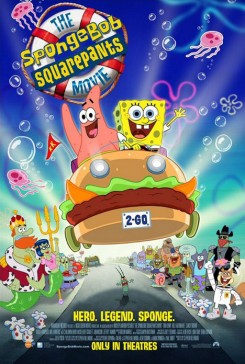 SpongeBob SquarePants takes leave from the town of Bikini Bottom in order to track down King Neptune's stolen crown.

American Humane's Film & Television Unit did not monitor the animal action in this film. Sponge Bob, Square Pants: The Movie is a Screen Actors Guild (SAG) production, and therefore it was required to provide American Humane's Certified Animal Safety Representatives on-set access whenever animals were used. Although the production contacted American Humane's Film & Television Unit regarding the use of seagulls in one scene, the birds did not work while the safety representative was present. The production did not inform American Humane about other scenes in which animals appeared. Paramount Studios did not provide a pre-release screening of Sponge Bob, Square Pants: The Movie and, since American Humane was unable to witness any of the animal action firsthand, the film has received a Not Monitored rating.