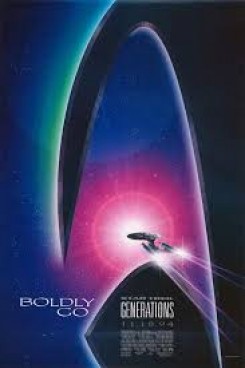 Star Trek: Generations is the latest science fiction adventure of the Starship Enterprise D in the 23rd Century. The film opens with the maiden voyage of the "New" Enterprise B. The guests of honor assembled include the original crew with Captain Kirk, engineer Scott and Chekov aboard. When a distress signal interrupts the media party, we learn that the ship is manned by an inexperienced captain and is not fully equipped to soar into action. A catastrophe ensues when they try to rescue two cargo ships that are caught in an energy field. In saving some of the occupants of the ships, they unfortunately lose Kirk. Four generations after this accident, the next crew of the Enterprise D, headed by Captain Picard, receives an emergency call to save scientists on an experimental probe. The only one left alive is the human-like alien Dr. Soran, who was coincidentally a survivor of the earlier energy field rescue almost a century earlier. Currently aboard Enterprise D is another survivor of that earlier rescue, Guinan. She enlightens Picard as to the nature of the energy ribbon known as the Nexus. Within this field, one is able to experience feelings of consuming joy, so seductive, that you never want to leave. To get back to this state of Nirvana, Dr. Soran will stop at nothing, including the destruction of another planet, Veridian 3. It becomes the fate of Picard to put himself in the path of this seductive energy and experience the Nexus in order to stop Soran from his plan of annihilation. Once inside the Nexus, which is also a time warp, Picard encounters Kirk. It seems that Kirk did not die, but was sucked into the Nexus and is living out his fantasy of bliss which includes his beautiful home in the mountains shared by his lost love, Antonia. Together, Kirk and Picard overcome the addictive lure of the Nexus and band together to destroy Soran, saving both Veridian 3 and the Enterprise D.

Animal action is simple in this film and includes the use of a cat, a dog and horses. In several scenes on board the Enterprise D, we see the ship's mascot, Spot the cat. He jumps up onto a table and proceeds to get stroked by members of the crew. In the final scenes of the film we see Data searching through the wreckage of the Enterprise to find Spot. Data lifts a piece of the debris and finds Spot huddled in a box-like space and he lifts the cat up and hugs him. For this scene the trainer placed the cat just prior to shooting and gave the cat a verbal command to stay since the cat was never actually confined in the space. When Picard discovers the idyllic home of Kirk within the Nexus, we encounter Kirk's dog, Butler. The dog walks into the kitchen from outside and Kirk strokes him. For this, the dog responded to the trainer's verbal commands. Later Picard and Kirk saddle up two horses and ride out into the mountains. Kirk realizes that life in the Nexus is not reality when he jumps his horse over a ravine, then jumps back again without any fear. This jump had been something he had always feared in his life prior to this and it becomes the test that convinces him to join Picard. For this scene a trained jumping horse was used and an experienced wrangler acted as a stunt double for Kirk. Because of the camera angle, the jump which was a very mild jump over a ditch, was made to look like a more dangerous stunt. The camera angle was low and pointing into the sun, which created a lens flare and made it difficult to discern specifics such as the depth of the ditch and the distance covered by the jump. The other horses in the scene are ridden by Picard and Antonia, but this action is very mild with the horses merely going A to B at a slow pace.