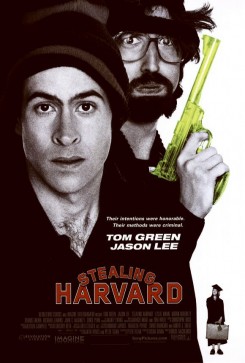 In this comedy, upstanding Uncle John (Jason Lee) takes drastic measures to pay for his Harvard-bound niece's tuition fees. With help from his bungling friend Duff (Tom Green), John resorts to a life of crime and folly to make his niece's Harvard dreams come true. Adding to the duo's misadventures is a feisty terrier named Rex and several other animal stars.

A 3 year-old male English Staffordshire Terrier named Zeus won the coveted role of Rex, beating out several other eager canines that auditioned for the part. Many of Zeus's scenes require him to lounge around in an office or on a comfy couch. For these relaxing scenes, the trainer placed the dog on his mark and cued him to "stay" or "look" from off-camera.

At one point, Rex rides in a car with his guardian. The trainer placed the dog in the front seat of the car and hid in the back seat, cuing the pooch to stay still while they went for a slow-moving spin.

Fully rested from his lounging scenes, Rex puts on his action-star cap for a truly magical scene with Duff. Rex chases Duff down and jumps up onto him, burying his nose in Duff's pants. A trainer released the dog and cued him to run to the actor, who had treats hidden in his pocket. As a distraction, Duff tosses a prosthetic arm into another room and Rex chases after it. Now trapped in the room, Rex jumps against the glass door trying to get out. Rex manages to open the door by jumping on the handle, and he barrels out of the room and chases Duff into the parking lot. Rex catches up to Duff and pounces on him, humiliating him further with a typically canine display of dominance. Duff, however, not ready for such an intimate relationship, callously tosses the pooch off of him. To accomplish this, an off-camera trainer cued the dog to jump up on the glass and bark and scratch. Zeus was also trained to jump on the door handle and open it. Once out of the room, trainers again directed the dog's movements, rewarding him amply with treats for all of his hard work. In addition, a mechanical stuffy Rex was created to simulate some of Zeus's actions and was used when Duff tosses the dog.

Undaunted by Duff's rude interruption, Rex picks himself up and goes after Duff again, following him into the back of a moving van. In reality, the film was merely sped up to make it appear as though the van was moving. Off-camera trainers cued the dog to follow the actor into the van. Zeus was not inside the van during the subsequent police chase.

A woman opens a kitchen cabinet and finds her missing cat with his head stuck in a jar. The woman picks up the cat and removes the attached jar, setting the cat on the floor. To safely achieve this action, a trainer placed some cat food inside the wide-mouthed plastic jar and the cat comfortable placed his head inside and began to eat. A trainer held onto the cat through a trap door that was cut inside of the cabinet. The actress opened the cabinet door and gently took the cat from the unseen trainer's hand and removed the jar and set the cat on the ground.

Duff, wielding a loud leaf-blower, sadistically blows over a little bird sitting in a garden. A trainer released a canary to fly over to a flower in the garden, where the trainer had placed some birdseed. A small fan was placed off-screen and aimed to gently blow the bird and his perch. Later, in post-production, computer-generated effects were added to simulate the bird being knocked over by a leaf-blower.

Fourteen horses were on hand for the two scenes that take place at a racetrack. Filmed at an actual racetrack in Arcadia, CA, production filmed an actual race for one scene and simulated a race for the other sequence. Several trainers accompanied the animals and only experienced riders were allowed. The race was edited in post-production with scenes from the real race and the staged race.