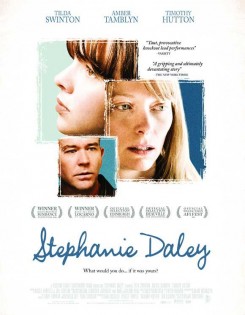 Stephanie Daley (Tamblyn) is accused of murdering her newborn child. She claims the child was stillborn and she did not murder it. Lydie Crane (Swinton) is a forensic psychologist who tries to determine the truth.

The scene depicting a deer hit by a car was a compilation of separate shots edited together in post-production. For one shot, trainers positioned a deer in front of the parked car and shone the headlights on the animal. The road was closed to all traffic and a trainer had the deer on a leash to keep it in place. In some close-up shots, the deer is made up with nontoxic imitation blood. Production provided documentation that the "dead" deer used to complete the accident scene was fake.

Stephanie (Tamblyn) has a pet cat that performs mild action in a few scenes of the film. Two seven-month-old Persians were on hand for this part; "Mr. Freeze" was the primary actor while "Cocoa" acted as his back-up if needed. Tamblyn met both cats before filming began and received extensive handling instructions from their trainer. The felines were also introduced to the set beforehand to make sure they felt comfortable in their new surroundings. For each scene, the trainer handed the cat to Tamblyn right before the cameras rolled and stood nearby using hand signals and toys to get the cat to look or walk in various directions as required. Both cats were very comfortable with the action and received food rewards upon completion of each shot.