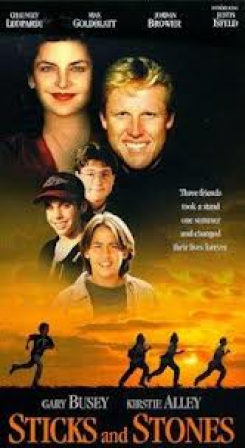 Sticks And Stones is a film about three adolescent boys, Joey, Book, and Mouth, and their friendship and problems they face growing up. One of the problems Joey faces is the constant harassment he gets from Dale, his older brother. Joey is a gifted baseball pitcher and wants to try out for the local Babe Ruth league. However, Dale plays on the team and due to his brother's dislike of him, Joey is intimidated and it keeps him from trying out. There is another intimidating force in the three boys life which is, Hayes, the school bully. Hayes is always chasing them home from school, picking on them, and beating them up, until one day the three boys decide to fight back. Mouth gets his mom's gun and they coax Hayes into chasing them, leading him into the woods to an abandoned shack. At first, they threaten Hayes with the gun. They want him to know how it feels to be bullied by someone. But, between the harassment from his brother and Hayes constant bullying, Joey looses it and decides to really shoot the boy. Mouth and Book realize he is serious. Book struggles with Joey for the gun and in the process the gun goes off, shooting Joey in the shoulder. What started out as a harmless prank, ends up with Joey in the hospital with an injury that will end his chances for a baseball career forever.

There is one scene where Hayes is chasing Joey and he runs through a neighbors' yard. As he nears the fence, he passes a dog tied to a stake in the ground. The dog barks as Joey passes him. For this scene, the trainer merely tied the dog to a stake in the ground with a 15ft. lead rope attached to his collar. He then stood behind the camera and cued the dog with verbal commands to bark as the boy passed.