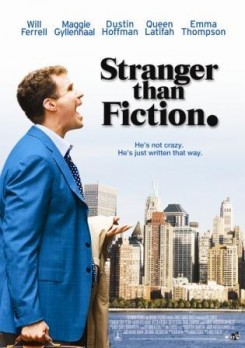 IRS agent Harold Crick's (Will Ferrell) ho-hum life changes forever when he begins to hear his life being narrated by a voice only he can hear. In a bizarre twist, this narrator turns out to be a real person — a reclusive novelist fighting writer's block as she finishes her newest tragic tale. Kay Eiffel (Emma Thompson) eventually hits upon a smashing ending for her protagonist, but she is oblivious to the fact that her lead character is alive and bound to fulfill the fate she writes for him — to the letter.

During some shots in Ana Pascal's (Maggie Gyllenhaal) bakery, a homeless man appears with his dog, a Staffordshire terrier mix. Two trainers were nearby at all times on this indoor set, cueing the dog to perform mild action such as sitting or laying near the actor and lapping at a bowl of water. Trainers brought the dog to set prior to shooting to familiarize him with the sights, sounds and smells on location.

The nature documentaries Harold watches on television in one scene were all stock footage from National Geographic, BBC and Winged Migration.