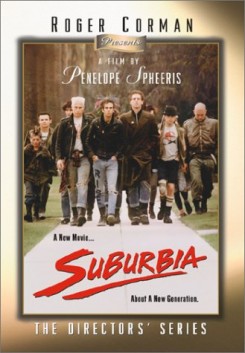 In Suburbia—You Wouldn't Want to Live There, a group of motley teenage punk-rockers live out their communal existence with a pair of Doberman Pinschers and a pet rat. In their rapidly decaying neighborhood, a pack of wild dogs forage for food in garbage cans. Vigilante private citizens try to rid the area of the wild dogs by shooting them.

Although filming was done in and around Los Angeles, AHA was never notified of the use of animals in the production.

According to the animal trainer's statement, the shooting action was accomplished by putting the dogs on a tether-line with thin cord wrapped around the dogs' front legs. When the end of the line was reached, the dogs' front legs were jerked out from under them, causing them to tumble into a fall. This technique is similar to the rigging of a Running W wire trip on a horse. As tripping is unnecessary and stressful to any animal, AHA did not sanction this type of animal action and thus rated the film Unacceptable.