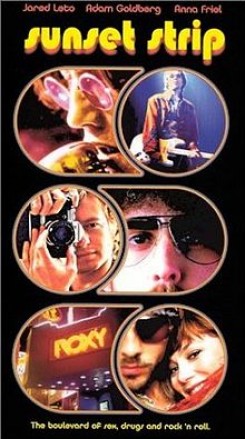 Sunset Strip depicts the lives of several young hopefuls who inhabit the rock and roll world of the early 1970's in Los Angeles.

Zach (Nick Stahl) is struggling to get his band noticed and jams with a mystery guitarist that he can only hear from his deck. They talk to each other through music and fill the canyon with electric guitar conversation. Tammy (Anna Friel) is a costume designer who has a flair for styling rock and roll bands. However her taste in men is less discriminating. Michael (Simon Baker-Denny) is a photographer who is gifted and secretly in love with Tammy. Clem (Jared Leto) is a country singer with a band that is just on the brink of either fame or collapse.

Creatures featured in the film are a dog, a horse and some peacocks as atmosphere on the lawn of a mansion.

Zach walks in the canyon where he lives and often passes a pretty girl who is walking her dog. He is far more interested in her than she is in him. The dog appears to be happy just to walk on the country trail.

During a photo-shoot with Clem's band, Michael is working as the photographer and Tammy is styling the wardrobe. The location of the shoot is an old saloon movie set where Clem wants to ride into the bar on horseback with guns blazing. However, the gunfire scares the horse and it rears in response. Later he and Tammy ride out of the saloon together on the same horse.

For this scene a seasoned movie horse was used. The trainer prepped the horse in pre-production to accustom it to being inside the saloon. The ears of the horse were protected from the noise of the gunfire and only quarter loads were used for additional safety. The trainer prepped the horse to do very low rears in response to the gunfire. The horse was cued to rear by the trainer using visual commands and was not actually frightened by the sound of the gunfire. Rubber pads were placed on the saloon floor to insure safe footing for the horse. Additionally, the saloon doors were rigged to open using monofilament so that it only appeared as though the horse was pushing them open.

The peacocks that appear on the lawn of the mansion were placed there by three trainers and retrieved after filming.