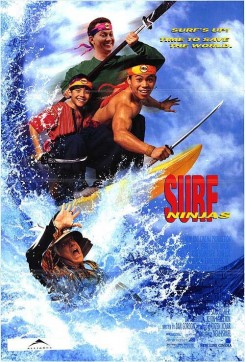 Surf Ninjas is an adventure-comedy targeted for young audiences. Two Oriental brothers, 15-year-old Johnny and 11-year-old Adam, live with their father, Mac, in the surfside town of Venice, California. Together with their wacky best friend, Iggy, they live the good life of typical American youth. Suddenly, without warning, the boys and Mac are attacked in their home by Ninja assassins who kidnap their dad. The boys are saved however, by a Ninja named Zatch, who tells the boys that Mac isn't their father and that they are really royal princes of a small island in the South China Sea. Zatch further reveals that the rest of their family had been assassinated in a coup when the boys were very young, and that Zatch and Mac had rescued the boys. Zatch says it is now their destiny to lead the rebellion that will save their island and people from the rule of Colonel Chi and rescue their Mac. Zatch sets sail with the boys for their island where Zatch leads them to their ancestors' mystical weapons, which miraculously transforms the boys into fighting Ninja warriors who lead their army of surfing villagers in an attack against the Colonel's castle fortress.

A variety of animals are seen in this film, mostly as atmosphere, such as pigs, oxen, goats and a lamb on the island. In a brief scene a dog sniffs at a body that has washed ashore. Fish are in an aquarium at a restaurant. An octopus is in another tank when Adam reaches into the tank, grabs the octopus, and shoves it into the face of an attacker. A fake octopus was used for this scene. In a flashback scene, an elephant steps on Colonel Chi, crushing parts of the villain. This scene was shot in cuts with a real elephant and a fake elephant foot. When the Colonel is stepped on it is done via an extreme close-up of a fake elephant's foot. The elephant is seen again towards the end of the film in a courtyard ceremony with a carrier on his back that contains two people. The brothers meet a monkey in the jungle. The monkey takes a small video game from Adam and gets Adam to follow him as the monkey leads Adam to a cave where a storage of weapons is kept. All of the monkey's action was basically A to B movement. The animal action for Surf Ninjas was filmed on location in Thailand and local animal trainers were used. American Humane discussed the details of animal action with a representative of the production company, and because of the mild nature of all of the animal action.