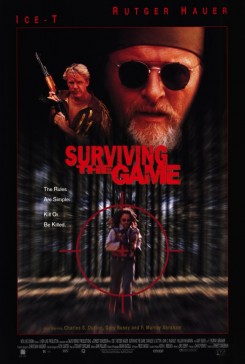 Surviving the Game is a brutal story about a homeless man, Jack Mason, who, down on his luck, accepts a job offer to assist a hunting party. To his surprise, he is the one they hunt. He must call upon all of his inner resources if he is to stay alive. He finally does emerge victorious with every member of the hunting party meeting their death by the film's end.

One early shot is of a deer running 20 feet through a forest. This was achieved by one trainer releasing the deer and another trainer receiving the deer, rewarding it with food. An early scene shows a traffic accident wherein a cab runs over a dog in the street, killing it. Mason picks up the dead dog and carries it away. He then digs a grave and buries it. This scene was shot in cuts. For the shot of the dog running, one trainer had released the dog and had thrown a frisbee to the second trainer (off camera), that the dog chased. Camera lenses and angles made the dog seem closer to the car than it was. No impact is shown on screen, but is inferred with sound effects. The dog lying by the cab's wheels is a fake dog with stage blood. It was the same fake dog that was carried by the actor and buried. Another scene shows Mason hopping a fence where a guard dog barks, ultimately walks with him and accepts a piece of meat from him. To achieve this the trainer gave verbal and visual cues to the dog. There is a scene of some hunters transporting a pig in a cage to their hunting cabin. In a subsequent scene in the cabin, the hunters serve a pig's head at the dinner table. The pig in the cage was not harmed. The head had been purchased from a butcher shop. Other action shows a bird perched on an actor's arm, a goat standing on a hillside, and a wolf hybrid growling. There are also hunting trophies of wild animal's heads on the wall of the cabin. These were supplied through the prop department.