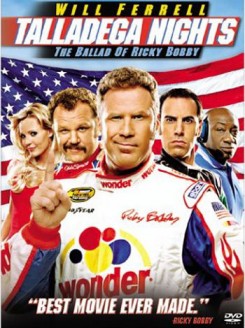 Instilled from childhood with the motto "If you're not first, you're last," NASCAR star Ricky Bobby (Will Ferrell) has become a national hero because of his unconventional style. Ricky and his lifelong friend and racing partner Cal Naughton Jr. (John C. Reilly) always come in first and second in every race—that is, until colorful French Formula One driver Jean Girard (Sacha Baron Cohen) enters the picture and unseats Ricky from his position as NASCAR's top driver.

At Jean Girard's Alabama chateau, Jean pets his two stabled horses while his domestic partner, Gregory (Andy Richter), trains a group of German shepherds on the lawn. For Jean's mild equine interaction, the owner of each horse stood out of frame next to their animal and periodically scattered some food on the ground to hold their interest.

One of the professional handlers from Animals of Distinction doubled for Gregory in this dog training scene. He cued the German shepherds to roll over, get into sit-stay or down-stay positions, run fast or stand on their hind legs. Several animal trainers were just out of frame to help focus their dogs' attention. The shot of six dogs stacked in a pyramid formation was achieved through the use of a green screen. Each pyramid level was filmed separately, with dogs on the middle and top levels standing on green platforms. American Humane also monitored other canine action, which does not appear in the theatrical release but was in full compliance with our Guidelines and may be included in the DVD version of the film.

A few gags in the film revolve around a cougar in Reese Bobby's (Gary Cole) car. In one shot, the big cat snarls at Ricky when he tries to open the driver's-side door. Moments later, the cougar jumps out and mauls Ricky. Two mountain lions — Dillon and K.C. — were alternated for this role. A trainer stood in for Ferrell when the cougar leapt out of the car and onto a four-foot-high platform, where it received a food reward. Ferrell then wrestled with a stuffed prop cat.

Production altered the stunt vehicle to accommodate the mountain lion's needs. Both doors were removed, and all soft material was removed from the car's interior, so the cats would not chew it up. The interior was then rebuilt entirely of plywood, so that the cats were, in effect, jumping from one platform to another. For the snarl shot, a trainer would show a food bowl to the mountain lion and then hold it farther back, cuing the cat to "get it." According to the Safety Representative on set, this snarl was actually very "cute" and non-threatening; the mountain lion was not acting in an aggressive manner at all.

Later, Ricky and the cougar become friends and ride side-by-side in the car. And, in another shot, the cougar pops up from the back seat. These two scenes were filmed entirely against a green screen; the cat was never in a real car with the actor. Both cats received long breaks between rehearsals and takes, during which they were encouraged to play, lie down and sleep in the grass near the set.