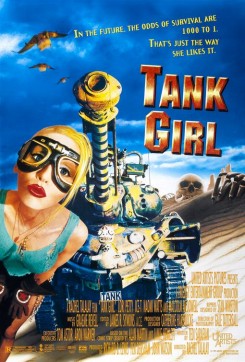 Tank Girl is adapted from the comic book of the same name. Throughout the film, we see flashcuts of the comic strip interwoven with live action. The year is 2033, after a comet has crashed into Earth creating the end of the world as we know it. Because of this ecological cataclysm, water has become the world's most precious resource and the Department of Water and Power has become the evil enemy as they rule 95% of the desert's water. The other 5% of the water belongs to the Rippers, who are half man and half kangaroos. They were created by their beloved leader, Johnny Prophet, who has since been killed by the Water and Power. The Rippers know only that they must preserve and fight for their water, and trust nobody. Enter our heroine, Rebecca, who rides her water buffalo through the desert. Both Rebecca and her water buffalo are wearing oxygen masks and goggles. Rebecca and her gang are the underground bunch who steals water on a regular basis. They have finally been caught. A group of evil workers from Water and Power attack Rebecca's gang's hideout, killing all but Rebecca and a little girl named Sam. To make things even worse, Rebecca's beloved water buffalo is shot and killed as well. Rebecca declares war against the Water and Power. Before she can take action, she is captured by the military men of the Water and Power. Kesslee, the head of Water and Power, merely wants Rebecca to admit that she has lost and he has won -- then, he will go easy on her. But Rebecca refuses and is tortured more than one could normally endure.

While working in the pit of Water and Power, Rebecca happens to meet another young woman about her age named Jet. The two of them team up together in their fight against the Water and Power. Jet knows all about the mechanics of the tanks and flyers. Together, they manage to escape, but without Sam. Rebecca comes up with a plan to get the Rippers to help her save Sam. Rebecca and Jet manage to get inside the Rippers headquarters. At once they are both captured and held as prisoners. Rebecca explains to the Rippers that she and Jet need their help to save Sam and to destroy the evil Water and Power. The Rippers decide to send Rebecca and Jet undercover into the Water and Power Hangar Building to photograph important data and transmit it to them. Once Rebecca and Jet prove themselves to the Rippers, they are initiated into their group. The only animal action in the film is that with the water buffalo and Rebecca. Rebecca rides the water buffalo mostly from A to B. The buffalo had been trained to be ridden and was docile and calm throughout the filming. Prior to filming, the water buffalo had been measured for his rubber goggles and oxygen mask which fit loosely, causing him no discomfort. In the scene where the water buffalo was shot and killed, only a gun shot was heard. The buffalo was not present when the gun was fired and sound effects were used to simulate the buffalo moaning.