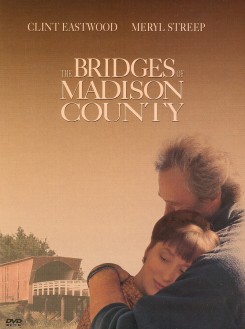 Bridges of Madison County, The

The year is 1965 in a small town in Madison County, Iowa. Italian born Francesca Johnson is about to meet the man with whom she'll fall in love, even though she's married to another man. Her husband, Richard, her daughter, 16 year old Carolyn, and her son, 17 year old Michael drive to the Illinois State Fair for four days. Francesca has decided to stay home, allowing the children to be alone with their father. Francesca is actually looking forward to staying at home alone. A few hours after her family left, Francesca is out working in her garden and has just taken a break for some iced tea. She looks up and sees a truck coming down the driveway to her home. A man asks for directions to the Rosemond Bridge. His name is Robert Kincaid, a professional photographer who has worked all over the world, free-lancing for various publications. Currently, he is working with National Geographic and is about to photograph the covered bridges of Madison County. Francesca tries to explain how to get to the Rosemond Bridge, but with the many roads which are unnamed, it becomes easier to just go with him to show him the way. She has a wonderful time laughing and talking with Robert who also takes a photograph of her. When Robert is done for the day, he drives Francesca home, and she invites him in for iced tea. They are enjoying each other's company, so Francesca invites Robert to have dinner with her. They have a wonderful evening, talking and listening to the radio. There is definitely a spark between them. The next day, before Robert can get to the bridge, Francesca drives down and leaves a note for him, inviting him to dinner that evening. He agrees to see her and invites her to accompany him to some of the other bridges that day. Francesca readily accepts and quickly drives into town to buy a new dress. That evening they once again have a wonderful time. They go for a walk and then they dance together. They realize their attraction to each other. They passionately kiss, then dance some more, then kiss, then dance and so forth. They make love. It is magic. Robert asks Francesca to come with him. She packs her bags, ready to leave everything, but she can't go. Too many people would be hurt. Robert leaves the next day, never looking back. They do see each other in town the next day but from afar. They know it can never be. Years later, after Robert dies, his attorney pays Francesca, who is now widowed, a visit to give her Robert's most precious belongings including one of his cameras, a book that Robert wrote about their four days together and a medallion she had given him so long ago. Within a couple of years, Francesca passes away. After her funeral, her children Michael and Carolyn go through her belongings and find a journal which tells of Francesca's and Robert's love for each other.

The Johnson's dog, Jack appears in several scenes. Shortly after Richard and the kids leave for the Illinois State Fair, Jack jumps up on Francesca's lap. Francesca pats him and puts him down on the floor. The day that Robert asked for directions to Rosemond Bridge and Francesca gets in the truck to go with him, Jack chases the truck for a ways. That same day Robert drives his truck back to town and Jack, once again, runs after the truck. To accomplish both of these scenes, one trainer held onto the dog until the truck drove by. The trainer then released the dog who ran to a second trainer who was waiting behind the camera. Food was given as a reward. The dog was never actually near the truck, so was in no danger. After Richard and the kids return from the fair, they are having dinner and, once again, we see Jack who is sitting waiting for a hand out of food.